Back to Religion News and Updates
By: Contributing Writer
Share 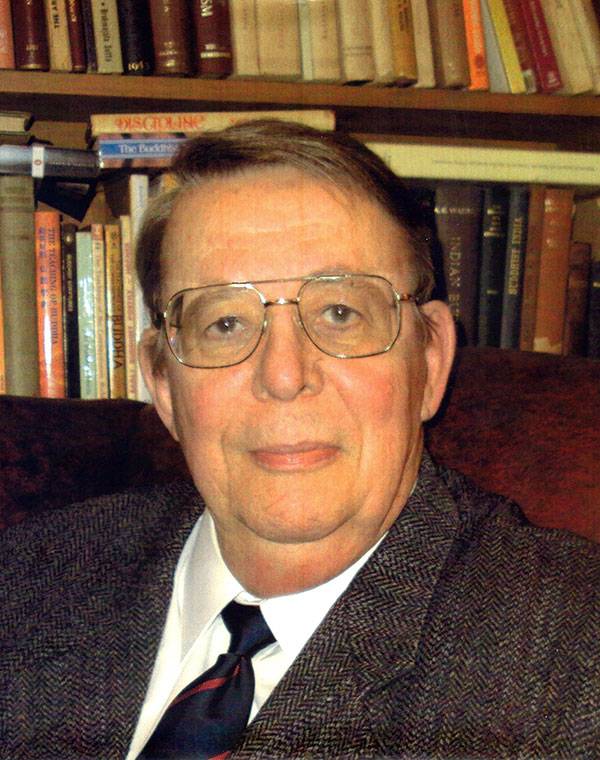 John Ross Carter, Professor of The Study of the Great Religions of the World, Professor of Philosophy and Religion, the Robert H. N. Ho Chair in Asian Studies, and Director of Chapel House and the Fund for the Study of the Great Religions of the World, spent the entire forty-two years of his teaching career at Colgate University with colleagues whose scholarship informed him and whose friendship gladdened him. He was born in Texas and lived there until, at the age of twenty-two, he graduated from Baylor University with a BA degree in history. In that same year, 1960, he married Sandra McNeill and together they traveled to Kentucky for a three-year sojourn at Southern Baptist Seminary where he earned the BD degree. The years 1963-1965 were spent at the University of London, King’s College, for the MTh degree. By autumn of 1965 he was enrolled in the doctoral program at Harvard University that would culminate in the PhD degree in world religions. Three of his seven years in the program were spent in Sri Lanka researching his thesis topic, Dhamma: Western Academic and Sinhalese Buddhist Interpretations. It was at this time that he and his wife met people who would become life-long friends; indeed two such people, Beeta Hegodagedera and Malani Kadinappulige, became like family in the years to come. Friendship was already beginning to open doors of understanding.

During the early years of Carter’s educational journey, he was helped along the way by the Frank Knox Memorial Fund, the Spalding Trust of Great Britain, a Rockefeller grant, and the Fulbright-Hays Program. Having completed his formal education in 1972, he and his wife moved to Hamilton, NY, where he taught until 2014 and lived out his retirement years.

Being a professor of world religions necessarily entailed world travels. In his efforts to understand the various religious traditions he studied, Carter augmented his years of reading research with travels to Burma/Myanmar, Thailand, India (particularly Assam), Scotland as well as with repeated sojourns in both Japan and Sri Lanka. Emerging from experiences with the people whose traditions he sought to understand was an ever-growing respect for those traditions and, as in his student days, special relationships with the people whose faith journeys lay within them.

Throughout his productive life, Carter did much to facilitate cross-cultural understanding. He produced more than forty scholarly works and, to date, has been published in four languages. As translator he worked with his friend and colleague, Mahinda Palihawadana, to translate the Dhammapada and its Commentary from Pali into English. As an editor he was responsible for compiling and editing works dealing with multiple traditions including Hindu, Jewish, Shinto, Buddhist, and Christian. As for his authorship, the title of his final book, In the Company of Friends; Exploring Faith and Understanding with Buddhists and Christians, suggests the inclusive openness with which he approached other traditions—exploring faith with others. And his contributions to scholarship and cross-cultural understanding have not gone unnoticed. One anonymous peer review spoke of one of his books as “groundbreaking.” The reviewer went on to say, “It brilliantly critiques current assumptions operative in the academic study of religions . . . and sketches a new direction for learning inter-religiously. . . .” Carter returned to Sri Lanka in 1999 where, among friends, he received an honorary DLit from Kelaniya University. In 2002 he was selected to be included in Who’s Who Among America’s Teachers. Later he was listed in Marquis Who’s Who as a noteworthy philosophy and religion educator.

But to say that Carter was an outstanding scholar in his field is to see but one aspect of the man. Teaching was his calling. Sharing the riches of his research with his students was his passion. Even here the theme of friendship would emerge, for so many of the friends who graced his life were people whom he first met as students in his classes. The graduating class of 2012 presented its Senior Class Award to him as one “who has made significant contributions to the enrichment of our experience” and “for his dedication and friendship to the class of 2012.”

If we step out of the academic setting for a moment to view this person in other aspects of meaningful living, we see a family man who as husband shared in the day to day home activities; as a father, nurtured and encouraged his children, and particularly enjoyed camping and canoeing with the family. In the broader circle of family, he took great delight in being with family in Texas—siblings, nieces, nephews and cousins. Extend that circle once more, and we see him in his ever-expanding church family —from Texas to Indiana as a student pastor at Bethany Baptist Church to Bloomsbury in London to First Baptist Church, Hamilton, NY. But the various aspects of this man had a unified core. Just as he took pleasure in his family (or should we say families?) he also took pleasure in the young lives in the classroom and he took pleasure in research that never made it out of his private study. For decades an abiding side interest of his was research into the lives of early Colgate graduates who went out to Asia as missionaries. Innumerable summer months were spent sorting through archival material; in fact, the family used to tease him about his fascination with “reading other people’s mail.”

When John Ross Carter exhaled his final breath on March 28, 2020, he left behind his wife of almost sixty years, Sandra; his daughter Mary Elizabeth and husband Andrew Strong and their children Samuel and Eve in upstate New York; his son Christopher John and wife Saori Hojo Carter and their sons Iori and Ian Carter in Japan; beloved extended family, many of whom live in Texas; and a broad circle of dear friends. He was predeceased by his three older siblings, Alice Rose Becker, Robert Louis Carter, and Mary Nan Carter.

This man—scholar, teacher, husband, father, friend—knew how to, and did, live life well in the company of friends.