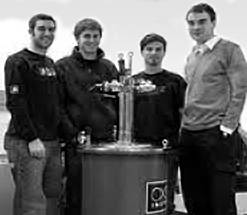 I spent my grade school years in upstate New York and attended high school in Mahwah, N.J. In 1989, I attended Fairfield University in Connecticut,  majoring in physics with a minor in mathematics, computer science, and philosophy.

In 1993, I moved up I-95 to New Haven, Conn., and attended graduate school in applied physics at Yale University. I received a PhD in 1999 in the group of Daniel Prober and was awarded Yale’s Harding-Bliss Prize in Engineering. I stayed on at Yale for eight months and worked as a post-doc in the research group of Rob Schoelkopf. In September of 2000, I moved to the Massachusetts Institute of Technology and did post-doctoral work in the group of Terry Orlando. In August of 2003, I started here at Colgate, and was promoted to associate professor with tenure in December of 2008.

I married Karen Cheal in 2002 in Cambridge, Mass., and we have two children, Nadia and Nico.

An important aspect of physics today is the effort to understand how the fundamental laws of nature result in complex behavior, often referred to as the study of emergent phenomena. For example, how does something as straightforward as a system of gas molecules organize itself into something as complex as a tornado? Two factors play a key role in the study of emergent phenomena: complexity, the number of constituents in a system, and nonlinearity, a property common to most system dynamics. Nonlinear systems which can be controlled, easily measured and scaled to large numbers are thus important to understand.

In our research, we study the behavior of networks of Josephson junctions. We have followed previous work in this field in studying soliton-like modes called fluxons or vortices and localized modes called discrete breathers. We have also begun work on synchronization in a system of disordered oscillators. Finally, we have devised a circuit of Josephson junctions to accurately model the time-dependent behavior of the voltage of a neuron, with an eye toward studying the emergent behavior of a large, coupled neural network. Our work fits in with Colgate University’s strong tradition of undergraduate student involvement in academic research.