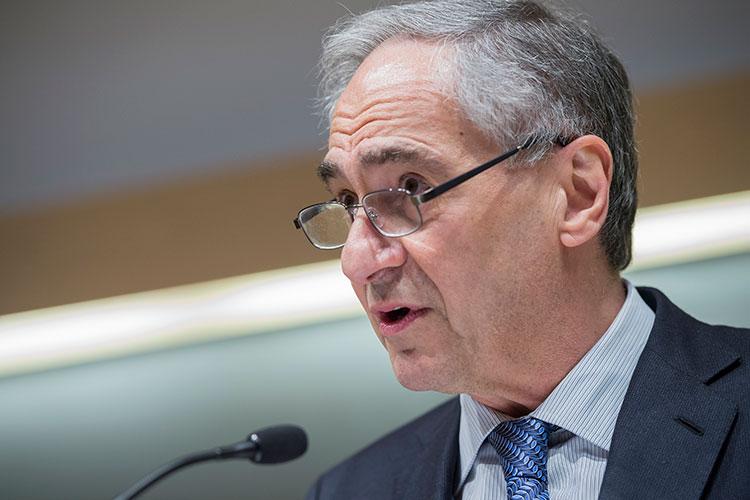 The first amendment of the U.S. Constitution prohibits government institutions from restricting freedom of speech. Private colleges are under no such obligation. So what does that mean for free expression in some of the nation’s most creative, intellectually curious places?

Back in July of 2014, with protests taking place at universities across the country, University of Chicago President Robert Zimmer formed the Committee on Freedom of Expression and charged its members with “articulating the university’s overarching commitment to free, robust, and uninhibited debate and deliberation among all members of the university’s community.” The result, published in January of 2015, was called the Chicago Principles.

Zimmer articulated those principles at Colgate last month, with sponsorship from the Center for Freedom and Western Civilization. He addressed a packed Love Auditorium and followed up his comments with a wide-ranging question-and-answer session that covered both the letter and the spirit of the principles.

At the outset, Zimmer quoted broadly from the document, which reads, “It is not the proper role of the university to attempt to shield individuals from ideas and opinions that they find unwelcome, disagreeable, or even deeply offensive.”

Although the University of Chicago embraces civility, collegiality, and mutual respect, those virtues cannot be used as an excuse “for closing off discussion of ideas, however offensive or disagreeable those ideas may be to some members of the community,” the principles state.

“Free speech is not a natural state of human affairs,” Zimmer told the audience. “Most people actually do not like it. They like the speech of those they agree with, which they will defend at great length. But there are fewer who are so enthusiastic about the free speech of those they disagree with. As a result, people are often inclined to silence or at least condone silencing those who disagree with them.”

According to Zimmer, those who unwittingly suppress speech for what seem like a litany of valid reasons merely set up a scenario in which they might lose their own freedom of speech in the future. That freedom, Zimmer said, “has been hard won over the course of a millennium, and history has demonstrated over and over again its fragility.”

Colleges and universities fill an essential role for society, which benefits from the knowledge and wisdom that springs from the academic enterprise. Society undercuts its future when it curbs freedom of expression on college campuses in response to present-day politics.

Everyone has a role to play in its preservation. After all, a university administration could simply accept that it has other priorities. Faculty could choose not to engage in the debate. Students could seek a more comfortable educational environment that is devoid of ideological challenges, differing perspectives, opinions, and assumptions — what Zimmer called the easy route.

But the harder pathway, though fraught, offers great rewards, particularly for students who might never have another chance to thrive on the creative energy that abounds on a freethinking college campus. “Embracing this challenge and growing personally through the discomfort it may bring will serve them well for their entire lives.”