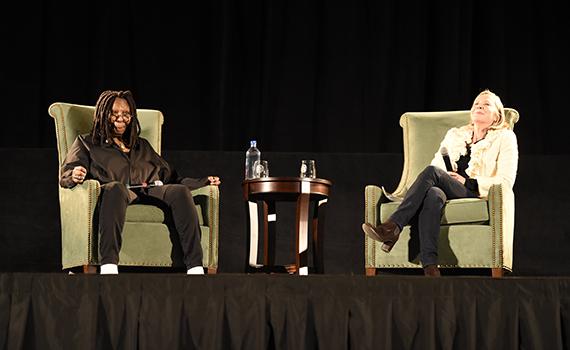 Last Friday, entertainer Whoopi Goldberg appeared before 2,500 Colgate community members in Cotterell Court. Her performance — a mix of comedy and grandmotherly advice — was a testament to the skills of a woman who has won countless awards for her work on screen, on stage, and in print.

For an hour, she held her audience’s attention, first offering a stand-up routine, then engaging in a Q&A session with trustee Lee Woodruff ’82, P’13, H’07. Afterward, she met with a small group of students in the Hurwitz Admission Center to discuss her life and issues of campus climate.

“The assumption was, if you came from the projects, you had no understanding of the rest of the world,” Goldberg told the students, gathered around her in the same space where they and their classmates had held protests during the fall semester. “My mother said, ‘Look, we don’t have any money, but we don’t need a lot of money. We can walk places, we can look at stuff, we can go to museums, we can go and do everything. There’s nothing you can’t do.’ So I just assumed that was true for everybody.”

An advocate as well as a storyteller, Goldberg was blunt in addressing comments about issues of racism and ignorance. She acknowledged those who had participated in last semester’s demonstrations.

“Until you all start screaming and saying ‘No more, we don’t like this,’ it’s just not going to stop,” she told students. “You got tired of it, and you said ‘no more.’ And you taught folks things that they didn’t know. It takes a voice to do that and it’s hard. Few people want to stand up, because you don’t want that attention, but if you don’t, no one will.”

The theme was one she established early in the evening as she took the stage in Cotterell Court.

Couched in the stand-up’s signature anecdotes of ’60s free love and personal hygiene, Goldberg’s message to undergraduates went to the heart of liberal arts education: knowledge of yourself and your world are crucial for a successful, fulfilling life in a democracy like America.

“People would say to us, ‘Why are you listening to that music? Why are you dressed like that?’” she recalled. “Then we grew up and became those people, asking the same questions: Why are you wearing your pants like that? I don’t care if you wear your pants down here, as long as you know what’s going to affect you in the future. I want you to be present.”

For Goldberg, being present means not allowing your humanity to be built on technology. It means being aware of what’s going on around you and willing to take a stand when you encounter injustice. It means knowing your own boundaries and being willing to state them boldly.

It was a message of personal responsibility that could resonate across the multiple generations that had come to campus for the sold-out performance.

“Your gut is really smart,” she said. “You gotta take a stand somewhere.”