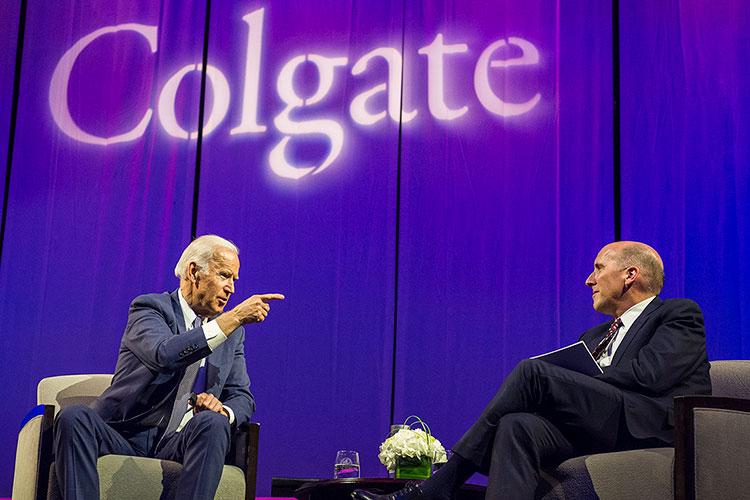 It was a pivotal policy day in Washington, D.C., as Congress failed to repeal the Affordable Care Act. Former Vice President Joe Biden, who helped the Obama Administration enact health care legislation seven years ago, brought current events to the doorstep of Sanford Field House, where he addressed the Colgate University community during the Kerschner Family Series Global Leaders at Colgate.

In prepared remarks — and during a subsequent on-stage conversation with university President Brian W. Casey — Biden spoke his mind on numerous issues facing the United States in the early days of the Trump Administration.

The evening began backstage, where Biden met with students for a Q&A session that covered topics ranging from campus violence against women to popular political engagement to comity in Congress.

He told students about his early Senate days, when Democrats and Republicans ate lunch together in a small room off the Senate chamber. Today, the dining tables are gone.

“There’s just no time for people to sit down and have a meal together,” Biden said. That lack of face time leads to a breakdown in collegiality that prevents legislators from reaching compromise and consensus. “It’s hard for me to dislike you if I know your mother has cancer or if you’ve just suffered a great loss.” On the main stage an hour later, Biden expanded on one of the key themes of his work both as vice president and as a private citizen: improving living conditions for middle-class Americans. According to Biden, digital innovation is deleting jobs in sectors across the economy, leaving dual-income families in unprecedented financial straits.

Drawing on 45 years of public policy experience, Biden outlined five steps that he believes will turn the digital revolution to the advantage of working-class Americans. They included basic protection for workers, modernization of infrastructure, a more progressive tax code, expanded access to capital, and increased access to affordable education.

Continuing education is a must in a world thriving on technology, he noted. “In this digital revolution, there’s going to be a constant requirement for workers, whether you’re an astrophysicist, an engineer, or a mechanic, to constantly be retooled and retrained. For the pace of advances is going to be so significant that your fundamental education will not possibly be able to keep you competitive.”

These steps are not the sole responsibility of government. “My guess is that this digital revolution is going to require governments to focus on core obligations,” Biden said. “I also think it’s going to require corporations and civil society to make some changes as well.”

“In this changing world,” he said, “it will be up to us to translate unprecedented capabilities into greater happiness and meaning, opportunity and freedom — not just for ourselves, but for everyone.”

Following his speech, Biden engaged in a conversation with President Casey, who described the former vice president as “a person for whom the conversation was essential, the debate a bridge, the handshake a means to move the world forward.”

Asked if he regretted not running for president and ultimately becoming the leader of the free world, Biden admitted that he wished he had won the position, but didn’t second-guess his decision not to run — born out of his need to focus on his son Beau, who, at the time, had developed the brain tumor that would ultimately take his life.

Biden switched between pol and preacher in the final moments of his appearance, prompted by a pair of questions that urged him to look at how America arrived at a Trump presidency and how the nation should move forward.

“We made a mistake in not paying attention to traditional Democrats who have lost hope,” Biden admitted.

The way forward is as clearly American as our ability to overcome another industrial revolution: “Just speak truth to power,” he said. “We have to keep calling these people to task.”

According to Biden, we must call the administration to task when they try to denigrate the value of the fourth estate and prevent it from doing its work. We must call them to task when they impugn the judiciary and forget that the separation of powers is what makes the constitution work. “We are uniquely a product of our institutions unlike any other democracy in the world,” he said as he strode the stage. “Without the system, nothing holds this country together, and that’s not hyperbole.” “The reason I have faith,” Biden said, “is that the vast, vast majority of the members of the Republican Party in the House and Senate are decent, honorable women and men. What we saw today [with the failure to repeal President Obama’s signature health care bill], in my view, was the first moment when the Republican Party stiffened its backbone and stood up. Because, I promise you, it’s hard to stand up to a president.”

Biden has served under eight. He was elected to the U.S. Senate in 1972, the sixth-youngest senator in the body’s history. By the time he was elected vice president in 2009, he had been reelected six times and become the Senate’s fourth most senior member. As vice president, he worked to improve middle-class living standards, and reduce gun violence and violence against women. He also became a catalyst for cancer research. Biden now pursues these initiatives through the newly launched Biden Foundation.

When he began this long career in politics, Biden reminded students, he was too young to be sworn in for the office he won. He had to wait 17 days. “You students, you’re our hope. You are the kite strings that lift our national ambitions aloft. We’re counting on you, and no excuses. I got there when I was twenty-nine.”

The Kerschner Family Series Global Leaders at Colgate, launched in 2007 and sponsored by Colgate’s Parents’ and Grandparents’ Fund, has brought a number of influential speakers like Vice President Biden to campus. Past guests include President Bill Clinton; Tony Blair, former prime minister of Great Britain; Felipe Calderón, former president of Mexico; and the Dalai Lama, spiritual leader of Tibetan Buddhism. For a full list of participants, visit colgate.edu/globalleaders.