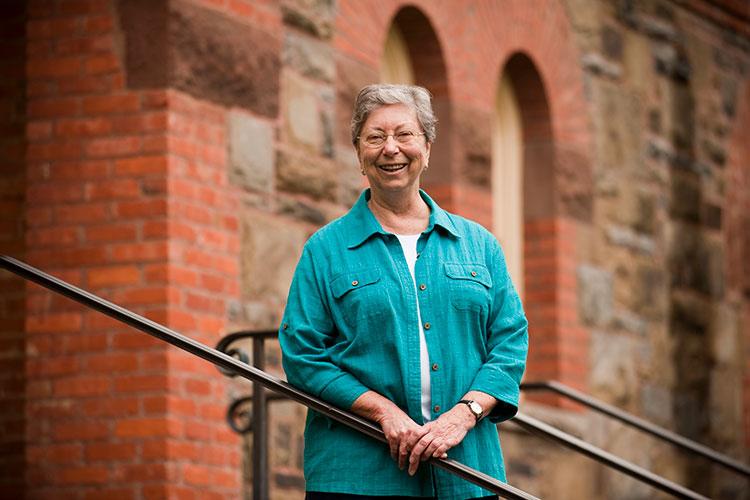 Immanuel Kant would have enjoyed the convergence of space, time, and transcendental idealism that took place in the Hall of Presidents on Friday, March 26.

Colgate trustees, administrators, and faculty gathered that evening to present the inaugural Jerome Balmuth Award for Teaching and Student Engagement to Marilyn Thie, professor of philosophy, religion, and women’s studies.

While celebrating her 35-year commitment to students and the learning process, the crowd also raised a toast to the award’s namesake, Harry Emerson Fosdick Professor of Philosophy and Religion Jerry Balmuth.

The award was created through a generous gift from Mark Siegel ’73 to recognize distinctively successful and transformative teaching, regardless of methodology. Though he could not be present for the ceremony, Siegel made his comments to the audience through Interim President Lyle Roelofs.

“I want to say a tremendous thank you,” he wrote, “to Professor Thie, who continues the tradition of the finest teaching of the liberal arts.”

Ideal liberal arts teaching turned Siegel, a philosophy major, into president of ReMY Investors & Consultants. Time spent at Colgate prepared him to become chairman of the board of directors at Patterson-UTI Energy, Inc., the J. Paul Getty Trust, and Cedars-Sinai Medical Center.

“By establishing this award, I wanted to demonstrate my commitment to liberal arts education,” he said. In naming the award after Balmuth, Siegel was also thanking his mentor. “You gave us both the skills and the confidence to reach our potential,” he said.

Balmuth spotted Thie’s potential in the mid-1970s and recruited her to became one of the university’s first female faculty members. In her remarks, she acknowledged the impact he had on her career then outlined part of the philosophy that has inspired her tenure.

“I’ve identified three ‘seeds’ I hope Colgate students will allow to flourish,” she said. “I hope for students to become caring, reflective, and responsible persons.”

Thie has planted these seeds as a teacher and confidant, as philosophy and religion department chair, chair of Women’s Studies, director of Core 152, director of Core Distinction, University Studies division director, and leader of the recent Core revision process. Her life’s work has helped define Colgate’s liberal arts mission.

“Colgate has been a wonderful arena for me, in many ways,” said Thie. “Receiving this award further encourages me to continue teaching a while longer.”