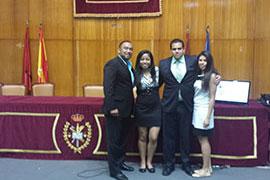 Members of the Colgate Speaking Union traveled to Madrid, Spain, this summer to compete in an all-Spanish-language debate tournament, representing one of just three schools from the United States at the international event.

Ten minutes before the start of each debate, the teams learn the topic of the contest and whether they’d have to defend or oppose a particular viewpoint. From there, teams hurry to prepare their arguments, regardless of their opinions on the matter, knowing they have only seven minutes to impress the judges. Teams are marked them for the quality of their speeches and their ability to deliver it in Spanish. Thomas Cruz-Soto, Arlene Robles ’15, Benjamin Rangel ’15, and Gisselle Perez-Leon ’15 (from left) pose for a photo in Madrid, Spain, at the World University Debate Championship in Spanish.

Of the 60 teams in attendance, only three—Colgate, Cornell, and the University of Vermont—were from the United States.

Perez-Leon, who is studying history and Spanish, said the debate improved her team’s oratory and argumentative skills. But another benefit was meeting people from Spanish-speaking nations.

“It was great to learn and share a little bit of our studies, countries, and cultural differences,” said Perez-Leon, a resident of Queens, N.Y.

This was the second year Colgate sent a team to the tournament. Six students attended last year’s contest in Chile, and organizers plan to send another group next year when the event shifts to Mexico.

“Thinking on my feet in Spanish during the speeches was definitely challenging, especially when I thought of a word or phrase in English that I didn’t know how to translate in the moment,” said Perez-Leon, who is studying abroad in Spain this fall.

The Colgate students debated with each other through online video calls to prepare for the tournament. While they did not advance into the later rounds of the tournament, the Colgate team defeated 16 teams—all from Spanish-speaking countries.

“I was very impressed with the students,” said Thomas Cruz-Soto, associate dean of multicultural affairs, who accompanied the students. “To go in as non-native speakers and beat sixteen teams was powerful.”

A number of countries had multiple teams at the tournament, including Chile, which won the event, Cruz-Soto said.

“We are looking for more students to compete and debate,” he said. “We hope to have more teams travel with the group. That gives us better chances to place higher.”