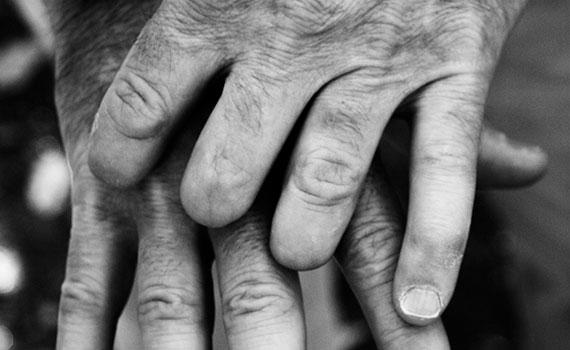 A photograph by Madison Bailey ’18 — with the working title Flathands — which is part of the Captured by the Lens exhibition, currently on display.

From family moments, to campus life and selfies, student photography filled a new exhibition, called Captured by the Lens, at Colgate’s Longyear Museum of Anthropology and two other locations.

The exhibition is the culminating work of 12 students in a fall course titled Photography: Anthropology and Archaeology, taught by Nick Shepherd, the A. Lindsay O’Connor Professor of American Institutions in the Department of Sociology and Anthropology.

Shepherd based the idea on his book, The Mirror in the Ground: archaeology, photography and the making of a disciplinary archive, which dealt with “archival photographs of archaeologists at work in Africa, from the 1920s to the 1950s,” he explained.

“I saw this as a great opportunity to pick up on some of the themes and ideas from the book, in a classroom setting,” Shepherd said. “The idea for the student exhibition came about because I wanted students not only to be reading and thinking about these issues, but also practicing and thinking about what it means to take photographs and curate them in a public exhibition.”

Addressing themes of objectification, humanization, self-stylization, and even selfie culture, the exhibition as a whole explores “how people capture one another through the medium of photography,” said Sarah Horowitz, curatorial assistant at the Picker Art Gallery and Longyear Museum of Anthropology. “In many ways the work is a social commentary on the students’ reactions to their everyday world, and how that relates to their lives as students.”

“I particularly liked those projects that picked up on current events in and around Colgate and Hamilton, like the protests last year against sexual violence on campus,” Shepherd said. “A number of students looked at ‘selfies’ as an emergent genre of images, and at the role that social media and selfie culture play in student life. Other students worked in quite an inward way from the basis of their own experiences, or experiences of people close to them.”

Madison Bailey ’18 explained that one of her photographs — with the working title Flathands (pictured) — focused on showcasing her dad’s hands and an injury that he sustained while working in a aerospace machinery factory when he was younger. “I owe everything to my Dad for allowing me to show the world an imperfection that he deals with and transforming it into a celebration of the unique,” Bailey said.

Although the fall course has ended, the exhibition will be on display through March 13 at the Longyear Museum of Anthropology, and will run through April 29 at the Creative Arts House and the Thought Into Action Entrepreneurship Institute.