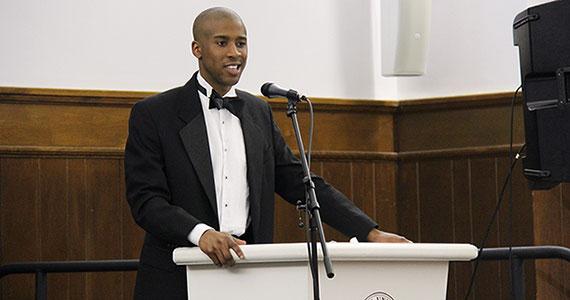 “If you are willing to be unapologetically yourself, you will find your people here,” Ian Dwyer ’14 told a crowd gathered in the Hall of Presidents for the Student Organization Recognition Banquet.

Dwyer was accepting the evening’s top award for Outstanding Group on behalf of The Game’s Afoot, a student organization that sponsors events featuring activities ranging from board games, to video games, to large-scale Nerf wars.

It was a remark befitting an evening that honored the 136 diverse student organizations within the Center for Leadership and Student Involvement (CLSI), ALANA Cultural Center, and the Office of the Chaplains.

Altogether, these groups planned and hosted more than 300 different events during the past year, including performances like Dancefest, and religious and cultural events like the spring celebration Holi.

During the banquet, three major awards and 10 additional awards were presented to student groups and leaders.

“Some of these awards are in recognition of a job particularly well-done,” explained emcee Sam Flood ’14, president of the Student Government Association (SGA). “And some of the awards are meant to highlight the zany side of what it means to be a student organization.”

Without further ado, here are the winners:

Rookie of the Year

Recognizing: A student organization in its first year of existence that has proven itself to be an organization of excellence.

Winner: Project Beauty, a club aimed at raising awareness of eating disorders on campus and in everyday life, promoting a healthy diet and exercise regimens, and encouraging students to maintain a positive body image.

Event of the Year

Outstanding Group of the Year

Winner: The Game’s Afoot, a group engaging a large number of students in healthy and sociable gaming activities.