A step forward for dance at Colgate 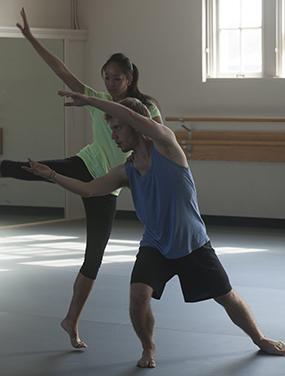 Members of the student dance group FUSE perform during the opening ceremony of the Helen K. Persson Dance Studio. Photo by Gerard Gaskin You wouldn’t expect to walk into a dance class and see 14 men and only two women. But that’s the makeup of Professor Tanya Calamoneri’s Dance Imagery and Improvisation course.

This semester is the first in which a full-time faculty member has taught dance at Colgate. “There’s so much interest, and I see a need for expression,” said Calamoneri, a visiting professor whose three academic dance classes filled quickly, with long waitlists.

Calamoneri’s Intro to Contemporary Dance is Colgate’s theater practicum, which has a different focus depending on the professor. Her other two classes — Dance Imagery and Improvisation, and Intermediate/Advanced Contemporary Dance — are being offered for the first time, as part of the English department. Previously, the university’s dance offerings (ballet and jazz/modern) were part of the physical education program. “I realized that there was so much passion and talent amongst the student body that it really needed a better platform; it needed more support,” explained Iwata, CDI president.

“I’m impressed by how much the students pulled together,’” Calamoneri noted.

As demonstrated in the improvisation class, the initiative is exposing students like Chase Newman ’16 to dance for the first time. “Coming into college, [taking a dance class] was not something I thought I’d ever do,” he said. “In the beginning [of the class], I felt awkward and weird, but the environment is a great change of pace, everyone in our class is close, and it teaches you to let loose.”

The CDI members are also currently working with the Student Government Association to create a dance governance structure that would give more prominence to dance outside of the classroom. From ballroom to belly dancing, there are 13 groups (more than 200 students) that all perform twice a year at Dancefest, one of the most well-attended events on campus.

CDI members have built a relationship with members of the Hamilton community through dance classes taught at the Hamilton Center for the Arts and the annual production of the Nutcracker, which features more than 40 local children.

This fall, a series of workshops were open to the entire community, including a Eurythmy workshop led by Mariko Endo, and a Partnering Dance workshop led by Phoenix Dance Project.

“We also want to extend [the CDI] beyond dance,” said Allison Zengilowski ’17, CDI vice president. “We are working toward making a very collaborative environment and culture here.”

For more:
– The arts on campus
– Colgate students dance while off-campus (see our Instagram feed for more examples)
– Dance at the ‘Gate video