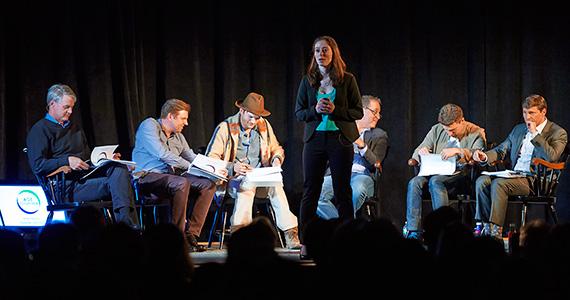 Colgate was the center of the entrepreneurial universe for a few hours Friday night, April 11, when more than 2,000 students, parents, and others streamed into Cotterell Court for a frank and freewheeling panel discussion that featured some of the biggest names in the business of disruptive technology.

Daniel Rosensweig P’15’17, former COO of Yahoo and now CEO of Chegg, enticed his well-known friends to drop into Hamilton, and the camaraderie on stage proved what Tony Bates, former Microsoft executive VP and Skype CEO, said about startup businesses that chase market share: “We’re not living in a zero-sum game.”

The panel also featured Brian Chesky, Airbnb co-founder, and Ashton Kutcher, actor and founder of A-Grade Investments. John Donahoe, eBay president and CEO, joined the panel as a surprise guest after successfully fending off Carl Icahn’s bid for PayPal just the day before.

CNBC’s David Faber moderated the discussion, which was as at least as entertaining and informative as anything on prime-time news.

For undergraduates keen on figuring out the future, the 33-year-old Chesky, who gratefully acknowledged his parents seated in the front row, was perhaps the most apt role model.

In the summer of 2008, a year after graduating from the Rhode Island School of Design, Chesky and his roommate stumbled on a multibillion dollar idea when they allowed strangers to stay on air mattresses in their living room to help pay the rent. “We weren’t trying to start a company,” Chesky said. “We were trying to solve our own problem.”

Problem-solving ability — which Kutcher characterized as “grit” or “the ability to work and overcome problems when most people quit” — is what Kutcher seeks when evaluating which companies are worthy of his investment.

“When we assess entrepreneurs,” he said, “we try to put some hurdles in front of them to see if they have the grit to overcome them.”

According to Colgate President Jeffrey Herbst, problem solving is among the “habits of mind and skills” that a liberal arts education promotes, along with creativity, experimentation, critical thinking, the ability to communicate, and the capacity to work with others.

“These also are the skills that, in the words of our flagship program, are necessary to bring ‘Thought into Action.’”

Colgate’s Thought Into Action Entrepreneurship Institute is the umbrella for all of the university’s related programs, including the Entrepreneurs Fund, Entrepreneur Weekend, the incubator space in the village of Hamilton, and more.

The emphasis on entrepreneurship at Colgate began five years ago with the Thought into Action (TIA) weekend mentorship program, in which dozens of alumni and parent entrepreneurs return to campus on a monthly basis to help students with their projects.

After the panel, three TIA students pitched their ventures to the panelists in a Shark Tank–style competition.

Katie Rydell ’14 presented Late Date, an app designed to help event attendees find a “plus-one.” Ariel Sherry ’15 described her consulting initiative, Age Together, which could help small communities tailor resources to their growing elderly populations. Seniors Daniel Swiecki and Joshua Lasker wrapped up the presentations with a request for funding on behalf of Sapling Advisory, a website that matches financial advisors with clients based on “relationship qualities” and needs.

Rosensweig assessed the presentations like the proud Colgate parent he is: “Each project had an element of enormity, had great founders, and could articulate where they wanted to go,” he said.

Consequently, the Chegg CEO split the $15,000 purse amongst the three teams, and possibly for the first time in the history of Cotterell Court, every competitor walked out a winner.