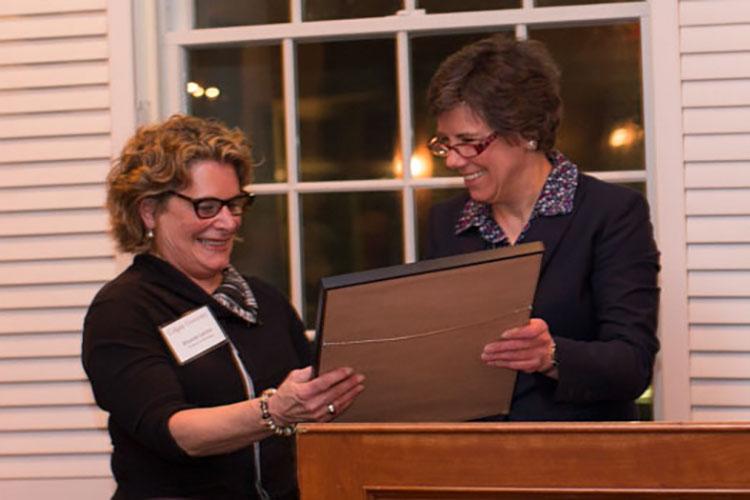 Colgate students spend four years of their lives engaging daily with some of the world’s brightest, most enthusiastic scholars. Faculty are at the heart of the academic experience, and in a world where undergraduates live the liberal arts, those bonds often extend beyond the boundaries of a classroom or the margins of a syllabus.

This week, the Colgate Scene paid tribute to the university’s dedicated teachers by publishing letters that former students have written home to Hamilton, thanking their professors for having profoundly touched their lives.

One of those letters was addressed to Rhonda Levine, professor of sociology and recipient of the 2016 Jerome Balmuth Award for Distinguished Teaching. The Balmuth Award was established by Mark Siegel ’73 in tribute to a pivotal professor who shaped his own Colgate experience and in recognition of the importance of teaching to the intellectual and personal development of undergraduates.

During her 34 years on the faculty, Levine has helped thousands of students realize the importance of what they do, say, think, and feel. And because of her expertise in the critical role of social class in stratification, labor politics, and race relations, she has found her office to be one of the most diverse meeting places on campus. “Professor Levine is an extraordinary teacher, concerned not merely with the knowledge, thoughts, and attitudes of her students but with their very souls, their values, and qualities of character,” said award namesake Jerome Balmuth, Harry Emerson Fosdick Professor of philosophy and religion emeritus.

Levine always wanted to be a professor, she told the colleagues, alumni, and students who gathered for the celebration. It was even listed as her most likely occupation in her high school yearbook. She earned her bachelor’s degree in sociology from Michigan State University, her MA from McGill University, and her PhD from SUNY Binghamton. Before arriving at Colgate in 1982, she held teaching posts at Bowdoin College and Hobart and William Smith Colleges.

“Teaching at Colgate has been more rewarding than I ever could have imagined. Every semester has been an adventure,” Levine said. “I never know who’s going to show up in my office to talk about something we’ve been reading in class and how it might relate to something happening in their own lives.”

Deborah Fox Rush ’86 was one of those who benefited from Levine’s mentorship. On a special tumblr site established to honor Levine’s career, Rush wrote, “My entire legal career has dealt with the issues of poverty and class inequality and its impact on defendants in the criminal justice system. The lessons I learned in [Professor Levine’s] courses clearly started me on a path to my lifelong career.”

Noting the outpouring of gratitude by Levine’s students, Interim President Jill Harsin said, “What they are all saying is ‘she made a difference in my life; she made me feel as if what I did matters.’”

Looking ahead to the ongoing role of great teachers in Colgate’s third century, Levine said, “As we seek to be an even more diverse Colgate, I hope that we do not lose sight of the equally diverse methods of reaching our students and challenging them to be productive citizens of this increasingly complicated world in which we live.”