There may be no direct flights from Tel Aviv, Israel, to Hamilton, New York. But that didn’t prevent Shimon Peres, former president and prime minister of Israel, from logging thousands of air miles to engage in conversation with Bob Woodruff ’83, P’13 during the Kerschner Family Series Global Leaders at Colgate. 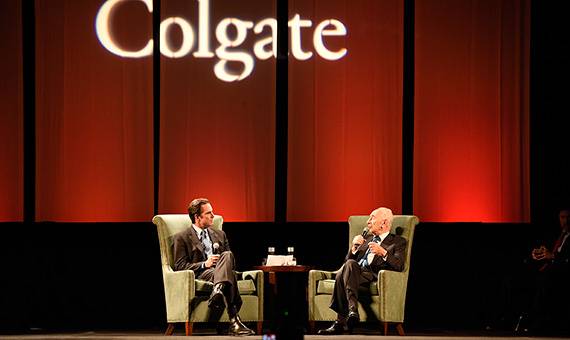 More than 4,000 students, parents, alumni, and community members watched the discussion tonight in Sanford Field House. A standing ovation greeted Peres and Woodruff as they climbed the stage, and the responses that Peres supplied to Woodruff’s wide-ranging questions drew further applause from the crowd.

While Peres spoke on topics from the development of the Kibbutz movement to the threat posed by ISIS and Hamas, his answers all revolved around a common theme: technology and science have changed the dynamic of societies. Peaceful cultural revolutions brought about by Facebook and Microsoft have circled the globe, but not all citizens have been able to reap the benefit.

Barred from this new world by a lack of economic opportunity, young men and women in the Middle East are taken instead by what Peres called “the excitement of extremism.” They swell the ranks of ISIS and Hamas. “They say they have the answers to the problems of the world,” he said. “But there is no one total answer to the questions we are having. We have to be more sophisticated.”

Peres outlined his own sophisticated solution to extremism. “We cannot face them just militarily,” Peres said. “We have to fight the reasons, not just the people.” Those reasons include poverty, but also a mistaken interpretation of religion. 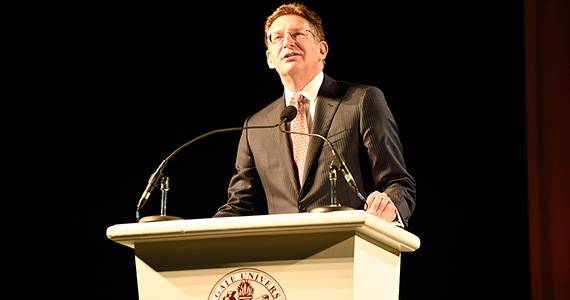 Colgate President Jeffrey Herbst introduces Shimon Peres and talks about a new series of gifts that will power the university’s commitment to international engagement.

The terrain on the way to peace has changed during Peres’s seven decades in public life. He noted that, in his early years, during and even after World War II, there were typically two sides to any conflict. Today, there are 100 sides, and building broad coalitions has trumped unilateral action.

And though he supported his country’s use of military force in Gaza last summer, he repeatedly stressed the utility of coalition-backed economic sanctions in response to the nuclear threat in Iran or the tyranny of the Assad regime in Syria. “Better a bank than a tank,” he said.

After answering questions about his own past and his hopes for the future of the Middle East, Peres turned from Woodruff to address Colgate students directly.

“Each of you possess more potential than you think. You have to invest in it — it doesn’t fall from heaven,” he said. “You can make the world a better place but you have to have the courage to dream. Use your imagination. Use your brains. Use your talents. Learn.”

This kind of direct address sparked the creation of the Kerschner Family Series. Peres is the tenth global leader to visit with the Colgate community since the series began in 2007. Other guests have included former Secretary of State Hillary Clinton, former British Prime Minister Tony Blair, and Virgin Group founder Sir Richard Branson.