As Colgate people around the world celebrated Friday the 13th and #ColgateDay trended on Twitter, the university welcomed international entrepreneur and Virgin Group founder Sir Richard Branson to campus for the fifth annual Kerschner Family Series Global Leaders at Colgate.

The presentation capped off the university’s Colgate Day celebration and launched Entrepreneur Weekend, a tribute to the business acumen of Colgate students, alumni, and parents, and the translatable skills of a liberal arts education.

In a nod to Branson’s roots in the recording industry, members of the student rap group Swagged Up Squad warmed up the crowd of more than 4,000 in Sanford Field House. After President Jeffrey Herbst announced the winners of a campuswide technology competition, the music continued as a flash mob emerged from the audience and escorted Branson, the evening’s guest of honor, to the stage.

What followed was a wide-ranging conversation between Herbst and Branson, covering Branson’s philosophy of business, his roots in entrepreneurialism, and his vision for the future of his company.

“Most businesses specialize in one area,” Branson told the audience. “Virgin has 400 companies, and we’re more of a way-of-life brand.” It started with a record company, founded because Branson heard a tape and thought it was brilliant. He wanted it to be heard.

Virgin Airlines was born after Branson was bumped from a commercial flight. “I’ve gone through life and been frustrated with experiences,” he said. “I thought, ‘We can do it better; let’s give it a go.’”

The same spirit that has turned Virgin into a commercial success is also driving Branson’s nonprofit efforts. Through Virgin Unite, he is tackling environmental and social ills by generating ideas and then finding bright, people-focused leaders to help address them.

While on campus, Branson met with members of Colgate’s Thought Into Action Institute, the Entrepreneurs Club, and the Benton Scholars. Asked his opinion on the biggest mistake one could make in starting a business, Branson cautioned against pursuing dollars. “Embark on something you can sing about,” he said.

Global Leaders at Colgate was formed by the Parents’ and Grandparents’ Fund of the Society of Families to bring Colgate students into contact with individuals like Branson. “We wanted to use our combined resources to introduce our students to global change-makers,” Parents Steering Committee Chair Wendy Carey told attendees during her remarks.

Taking part in a series that has seen presidents, religious icons, and ministers of state, Branson presented a fresh perspective for Colgate’s undergraduates, but he also echoed the trademark theme of hope for the future. “There are just as many possibilities in the world as there were five years ago,” he said. “The world needs entrepreneurs.”

Photos from the Weekend 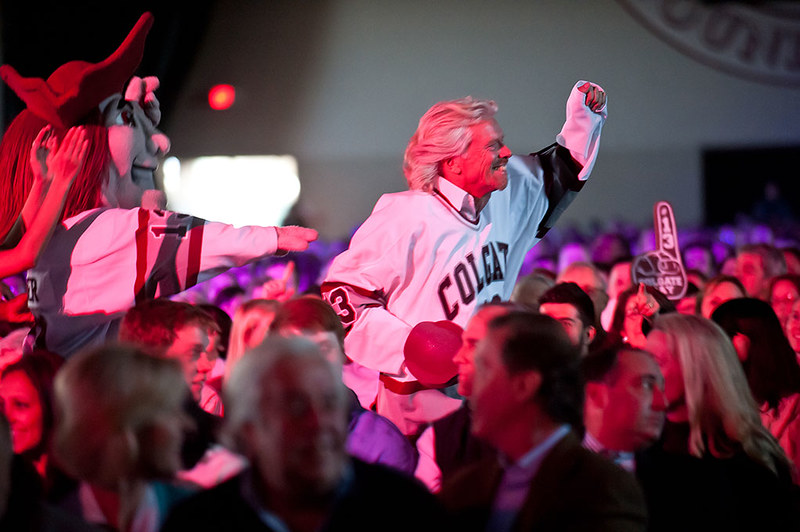