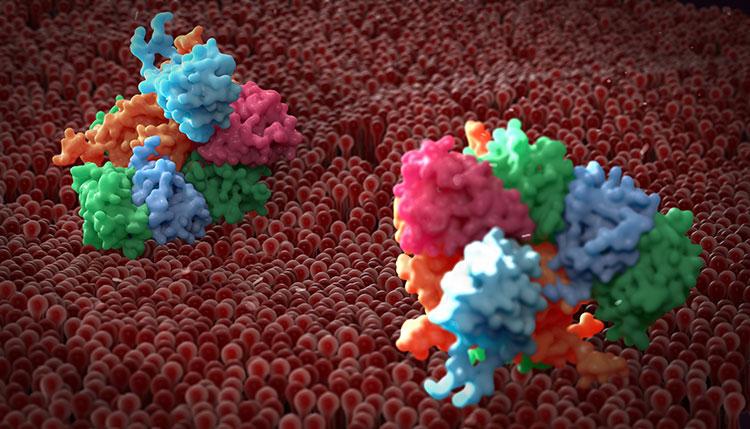 Plasma membrane of a human cell

We may picture our cell membranes as smooth surfaces but, actually, they are bristling with spiky structures called glycoproteins. “Some people call them the icing on the cake,” chemistry professor Ernie Nolen said. In healthy cells, these structures consist of a protein chain with a group of sugars attached on the end. Those sugars interact with molecules outside the cell. In some people with diseases such as cancer and muscular dystrophy, however, these glycoproteins break down and lose the all-important sugar on the end.

“If the sugars are not put on properly, the cell can migrate to other places, which in cancer is metastasis,” Nolen said. “In muscular dystrophy, if the sugar layer isn’t there, you don’t get adhesion to their support structures in the cellular matrix.” With a new, 3-year, $300,000 grant from the National Institutes of Health, Nolen is working to recreate structures like these artificially in order to detect diseases more accurately and potentially help to cure them.

Nolen has been working to create natural and synthetic molecules in his lab for more than 30 years. Oftentimes, these molecules are the keys to creating medicines that Mother Nature is ill-equipped to mass produce. The cancer drug Taxol, for example, originally came from compounds in the Pacific yew tree. But one 200-year-old, 40-foot tree only supplies 0.5 grams of the drug, when a typical treatment requires about 3 grams, Nolen said. “You’d have to harvest lots of trees for just one treatment.”

To make these complex molecules, Nolen first has to identify a useful compound and then come up with a construction plan, using reactions involving acids, bases, and other reagents to get them to adhere. “Most of my time I spend hammering one molecule onto another,” he said.

For the glycoprotein project, he is working to create a molecule just similar enough to those present in the body, but with a few crucial differences so the body recognizes it as foreign. He expects that the immune system will produce antibodies to the synthetic molecule, serving as a marker for the disease. “I’m trying to train the immune system to recognize certain structures so the antibodies that are formed can be a diagnostic of the early presence of a disease state,” he explained. That is crucial for diseases like muscular dystrophy and some forms of cancer, which are difficult to detect early on.

In addition, once the body starts producing those antibodies, then it will continue to produce them. The antibodies might aid in helping to kill the diseased cells as a way of treating the disease. “To some extent, your body is attacking cancer cells all the time,” Nolen said. “We want to amp up the immune system so that it gets angry and creates a better immune response.”