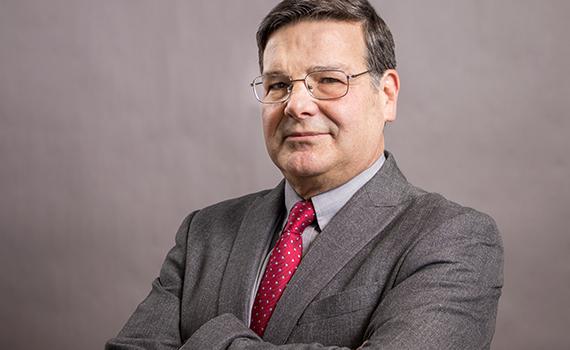 Some people look at the sunlight wandering across the bottom of a swimming pool and see only glare. Kiko Galvez, Charles A. Dana Professor of physics and astronomy, sees the fascinating effect of electromagnetic beams bouncing and sliding through watery matter.

The innate curiosity that leads Galvez to look beyond the obvious has served him well. Last year, for the first time, he and his fellow researchers intentionally created a light pattern known as a “monstar” by polarizing a beam of light and feeding it through a series of carefully placed lenses.

The physics community knew monstars existed. “But no one could figure out how to make them, and it’s one of those things that bugs you,” Galvez said. “I started trying one thing or another, and eventually I figured out the mathematical complexity underlying the pattern — the mathematical structure — so I could convert that to something I could use in the laboratory.”

His work was so revolutionary that it was featured in the Optical Society of America’s (OSA) retrospective on major advances of 2014. Here’s how Galvez described it for publication: “Human fingerprints contain patterns of ridges or lines that converge in loops or stars known as line singularities. Nature also contains ‘fingerprints,’ patterns of line singularities that describe flow and geometry, mathematically revealing topology and representing indefinite quantities.” Light is a wave. It can flow up and down, side to side, or a combination of the two. Physicists have learned to polarize light — to strip out waves that flow in a horizontal direction, for example, leaving only the vertical waves intact. Galvez faced the challenge of polarizing the wave while controlling its magnitude and phase in a way that would cause the beam to create a particular fingerprint pattern: the ever-elusive monstar.

Galvez and his student researcher, Brett Rojec ’14, worked in tandem. In his spare moments, Galvez would let his mind wander to the math behind the monstar, trying to envision the algorithm that would describe the light pattern he needed. Once he thought he had the answer, he began to write computer code to process the algorithm.

Rojec set up a table in Galvez’s lab, positioning lasers, lenses, polarizers, beam splitters, polarization-manipulating wave plates, modulators, and a device known as an interferometer at specific points. A beam of light would run the gauntlet and enter a box that would photograph the wave pattern and send the picture into the computer where the newly written program waited to do the analysis.

“By maintaining such exquisite control over the parameters of the light beam,” Galvez wrote for the OSA, “this new type of optical fingerprint can lead to innovative ways to encode and recognize information.”

Manipulating light waves can have a number of practical implications — just think of your favorite polarized sunglasses that keep you from squinting while you drive or windows that protect priceless works of art from UV damage. Think about it hard enough and you, too, might start seeing monstars in your swimming pool.