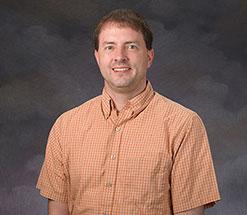 A microscope, test tubes, and dissected organs — these aren’t typically found in a prison. But, when Colgate professor Jason Meyers signed on to teach a biology course at a local correctional facility, these learning materials made their way into a rather unlikely classroom. Both Colgate and Hamilton College participate in the grant-funded program, which offers college credit–bearing courses to more than 30 inmates in the Mohawk Correctional Facility in Rome, N.Y.

“One of the things that was both challenging, but also incredibly rewarding, was working to design some lab exercises that could be done in prison,” said Meyers, a biology and neuroscience professor who taught a human biology course for the program. “The students were so engaged in these exercises, it was just fun to watch how excited they were.”

Colgate was invited to join the program and Meyers jumped at the opportunity to participate. “I was interested in the important service that this would be bringing to an underserved population,” said Meyers, “and there is a lot of data about the positive role education can play within the prison population.”

The program, initiated by Hamilton professor Doran Larson (English and creative writing), aims to reduce the number of prison inmates (65 percent) who finish their sentence and are later reconvicted and incarcerated.

Post-secondary education has proven to reduce recidivism rates for inmates who earn two-year associates degrees to between 9 to 13 percent, according to the program proposal.

“Participating definitely opened my eyes to some of the challenges and needs of our criminal justice system, and showed me how much impact education can have on the guys participating in the program,” said Meyers. “I hope that with the continued success of the program we can encourage bigger conversations about the role of colleges in participating in education of inmates.”

This past fall, the Mohawk Consortium College-in-Prison Program was recognized for its outstanding contributions to continuing education by the Continuing Education Association of New York.

The James C. Hall Exemplary Credit Program Award commended the cooperation between the institutions involved: “The College in Prison Program is innovative and successful, bringing multiple public and private colleges together to impact the lives of students and society at large.”