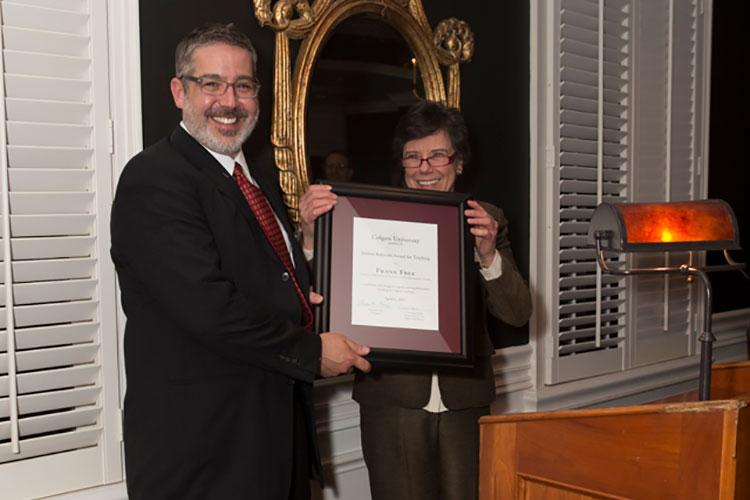 No one would expect a biostatistics course to draw a crowd of students. But when it’s taught by a dynamic professor with a gift for inspirational teaching, it can become a must-take class at Colgate.

Frank Frey — the associate professor of biology behind Biostatistics as well as numerous courses on evolutionary ecology, community health, and environmental studies — has that ability to inspire, and it has earned him the 2017 Jerome Balmuth Award for Teaching and Student Engagement.

The Balmuth Award was created through a gift from Mark Siegel ’73 and is named in honor of Jerome Balmuth, Harry Emerson Fosdick Professor of philosophy and religion emeritus.

“The most salient quality of Frank’s teaching is that it cannot possibly be contained by class days or hours, or even by classroom walls,” English professor Jennifer Brice remarked. “It is restless, exuberant, adventurous, curious, intelligent, energetic — all qualities that belong to Frank himself. He is always teaching.”

Frey’s teaching has taken place in the classroom and in the lab, where he and his students investigate diversity in plant populations. More than 20 undergraduates have coauthored journal articles with Frey. Headlines include “Antibacterial activity of traditional medicinal plants used by Haudenosaunee peoples of New York State” and “Selection and evolution with a deck of cards.”

Frey has also taken his students out of the classroom and into the world beyond, leading off-campus study trips to Wollongong, Australia; Cardiff, Wales; and the Bwindi region of Uganda. As one nominator noted, Frey’s work on the extended study to Uganda “is the model of the kind of genuine internationalization that has the potential to change the way we all interact with the world and view ourselves as a community.”

On campus and abroad, Frey sets the same high standards, demanding that his students engage with the material but also that they support each other in the attempt to learn.

“Even though I have high standards, and I will probably knock them over, I’m going to be there to catch them,” Frey said during last month’s award celebration. “We’re going to do this together — not just biology or environmental studies, but this entire experience we’re going to do together in partnership.”

Since 2013, Frey has also nurtured the university’s Office of Undergraduate Studies student community in his role as OUS Academic Director. “Frank has poured himself out for those in the program, dedicating himself to their academic and personal well-being,” Interim Dean of the Faculty and Provost Constance Harsh said. “His devotion has been truly exceptional.”

Exceptional teaching is part of a day’s work at Colgate, according to Frey, who thanked his faculty and staff colleagues for recognizing him with the Balmuth Award. “As I look out here,” he said, “I see friends, colleagues, faculty, staff, trustees, alumni. I see this community. You ask me what transformative teaching looks like at this school, it’s this. This is what we all do. This is what Colgate’s about, and I’ll be eternally grateful for all of your support.”