Professor Bruce Hansen looks at the ability to process a scene 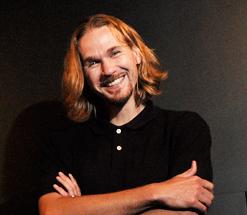 It takes humans about 27 milliseconds (or less) — approximately one-tenth of the time it takes to blink your eyes — to comprehend the meaning, or “gist,” of a scene.

Recently published research findings about “scene gist categorization” by Bruce Hansen, associate professor of psychology and neuroscience, and psychologists at Kansas State University, are significant for a number of human experiences.

“Deriving an accurate understanding of rapid scene categorization has critical implications for driving safety, instrument panel design for aircraft piloting, as well as eyewitness perception and memory, and surveillance — to name a few,” Hansen said.

Hansen and the other researchers sought to examine whether such “scene gist categorization” is a general process shared across species, or whether it may be influenced by differences specific to a species based on its history of adaptation to its given environment — called “species-specific adaptive specializations.”

To assess species-specific adaptive specializations, the researchers turned to pigeons, a popular nonhuman model of visual cognition. Although humans failed to gain the ability to fly, we do share an evolutionary structure with pigeons; the two species diverged during the early Permian period, explained Hansen.

The researchers conducted two experiments to assess whether scene gist processing is an ability unique to humans, or whether it is a more basic process that is deeply engrained in our neural hardware. They also investigated the extent to which the ability is shared across a wide range of species.

The study suggests that pigeons have the same ability as humans to recognize a scene in the blink of an eye — with one variance. The blink of an eye is longer for pigeons than for humans, so pigeons actually take about 10 times longer than humans to correctly identify a scene. We may not be able to fly, but at least we can assess a scene faster than pigeons.

“The shared functional capacity to rapidly categorize real-world scenes may well be shared across a wide range of species,” Hansen explained, “but their divergent evolutionary histories have led to adaptive specializations producing important predispositions and constraints on their ability to recognize scene gist.”

In other words, the past evolution of a species affects how it can recognize the meaning of a scene.

The findings point to further research possibilities beyond a comparison of pigeons and humans. The study can help us to understand how much genetic predisposition versus personal experience contributes to a person’s (and a wider variety of animals’) ability to recognize scene information in the blink of an eye.