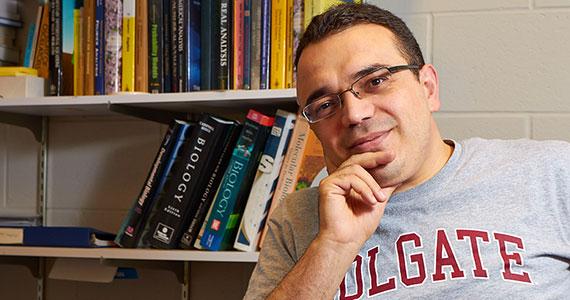 When Jack Holland ‘13, Adriana Sperlea ‘14, and Sebastian Sangervasi ’14 first began studying zebrafish with Assistant Professor of Biology and Mathematics Ahmet Ay, they probably never thought they’d end up published in one of the country’s most well-known biology journals.

But that’s exactly what happened.

Now pursuing their PhDs, computer science majors Holland and Sperlea cut their teeth as summer research assistants on Ay’s project on the zebrafish segmentation clock for two summers. Sangervasi, a math major, worked on the same project for one summer.

Holland and Sperlea worked with Ay on his two papers written in collaboration with Ertugrul M. Ozbudak of the Albert Einstein College of Medicine, examining the gene-controlled segmentation of the vertebrae during embryonic development. Their first paper was published in the journal Development last year. In the extension of the first paper, Sangervasi joined the team.  This second paper was published last week in the same journal.

The periodic segmentation of the somites of the vertebrae is controlled by a gene expression oscillator called the vertebrate segmentation clock, according to Ay. Their first study focused on identifying the pacemaker mechanism of this clock. They showed that a gene regulatory network, which includes a negative feedback loop and time delays, controls this mechanism and they were able to reproduce models with approximately 20 experimental phenotypes in five different genetic backgrounds.

Ay said that during vertebrate embryonic development, the body axis elongates in a polarized manner from the posterior. Strikingly, the period of oscillations varies in cells located at different places in the tissue, which results in traveling waves of oscillatory expression in the tissue. In their second study, they were able to explain the spatial variation of oscillation through the polarized increasing of the translational time-delay throughout the tissue.

“Basically, we tried to understand how the somites are forming using mathematical modeling,” explained Ay.

While the research is complicated, the choice of students wasn’t. On the hunt for students who were proficient in programming and could write code at a high level, Ay contacted the Department of Computer Science.

Holland and Sperlea responded to Ay, and they were hired for the summer research program. They spent 10 paid weeks during the summers of 2012 and 2013 using a high-level programming language to create models of zebrafish segmentation.

For Holland, working with Ay and the rest of the team opened up a whole new field of study.

“Biology has some really cool problems to solve. There’s a big demand right now for programmers and computer scientists that can come in and help with biology, and it was really surprising to me to see that kind of connection,” he said.

Holland is continuing to pursue computational biology research at Dartmouth College, working with a professor who does research on proteins. Sperlea is currently in the UCLA Bioinformatics Program, one of the top computational biology programs in the country, and Sangervasi is a software engineering associate at Apptus, a software company that works with online retailers.