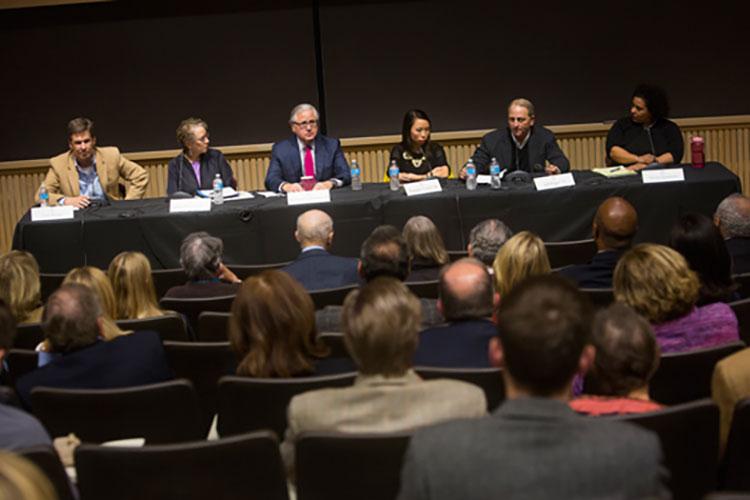 A professional network panel conversation titled “The Challenges Facing Journalism in the Age of New Media.”

Students exploring careers in the media and alumni looking to network with fellow graduates came together in Manhattan last month to hear from some of the university’s leading members of the fourth estate.

In a professional network panel conversation titled “The Challenges Facing Journalism in the Age of New Media,” Thomson Reuters National Journalist Lisa Bernhard ’87 and alumni from the New York Times, CNN, Buzzfeed, NBC, and News Corp delved into the challenges facing all news gathering organizations in the wake of a societal shift to online news consumption and the vast proliferation of social media.

“The overarching theme here is ‘where, ultimately, is the consumer going to land?’” Bernhard asked the panel. “How do we monetize that, how do we stay in business, but also how do we stay pure as well?”

At The New York Times, where Elisabeth Goodridge ’97 is a deputy editor, they are increasingly thinking about how content will appear on mobile phones and platforms like Facebook and Snapchat. Goodridge said the Times is now a subscription-first business that has added more than 300,000 in the first quarter of this year.

“We have also been very cognizant of the need for information about this new [presidential] administration,” Goodridge said. “So we have poured $5 million into our Washington operation, hiring fact checkers, data journalists, and investigative journalists to make sure we get the story out.”

Jonathan Dienst ’90, chief investigative reporter at NBC 4 in New York, said his job of finding a scoop, verifying that information, and getting it out first hasn’t changed much, but reporters are now increasingly gathering news from the public, thanks to the abundance of smartphones and the rise in social media usage.

“We have become increasingly dependent on the social media we receive from our viewers,” Dienst said.  “Of course we need to verify that and make sure it’s accurate; we don’t just throw things up on the newscast.”

Every organization represented on the dais is examining closely how the public shares and consumes news.

“We look at what people say when they share our content, and we put that into the development process,” said Carole Robinson ’83, P’18, chief communications officer at BuzzFeed. “For example, Tasty is one of our biggest brands. We know a lot about which Tasty videos have been shared the most and why. That’s direct data that we get from the audience.”

CNN is increasingly spending time and resources on collecting data from its products, surveys, and focus groups to understand their audiences.

“We’re looking, as we always have, at the motivation and behavior of viewers,” said Robin Garfield ’88, senior vice president of research and scheduling at CNN. “Because the platforms have multiplied, and in these times, the news cycle has sped up so much — everything has gotten increasingly more complex.”

At News Corp, where Christopher Guenther ’97 is senior vice president and global head of programmatic, they are constantly trying to understand ways to monetize content, but that can be increasingly challenging when many of the platforms are not under the content creator’s control.

“If you go to our websites, that’s one way we can sell advertising,” Guenther said. “Then, people are sharing on Facebook, or on Google and Snap — if it’s on a platform you don’t control, it’s a challenge. How do you balance all that? How do you drive up revenue to support large newsgathering organizations?”

Following the panel conversation, students, parents, and even an incoming member of the Class of 2021, gathered to talk and network. Jen Stone, Colgate director of annual giving and the professional networks, also explained to those in attendance that these events, like others held for those interested in the law, health sciences, and business, have helped fuel a career services program to provide grant funding to assist students who take unpaid internships in places like New York City.

“As we all know, internship opportunities during undergraduate years are critical to a student’s job preparedness and competitiveness, but not every Colgate student can afford to pursue these important opportunities,” Stone said. “Now, thanks to the Summer Funding program and the generous support from our alumni, parents and friends, hundreds of students are awarded the necessary funding to pursue their career dreams.”

Martin Alderson-Smith, parent of Lucy Alderson-Smith ’20, noted that he has three other children in college, but Colgate is the only institution encouraging his daughter to think about careers so early in her college tenure.

“This place is truly remarkable,” he said. “It’s really a family, and such a welcoming atmosphere. They are really thinking about life beyond Colgate.”