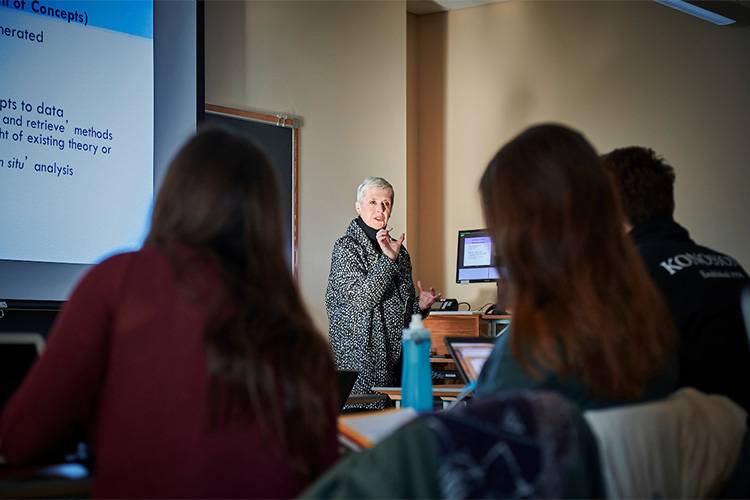 Prior to her official arrival in Malmö, Kraly was invited to give a keynote speech at a conference on refugee and border issues at the Malmö Institute for Studies of Migration, Diversity and Welfare last October.

“In the keynote I was who I am — a Colgate professor,” Kraly said. “I tried to make my remarks include the participants and presentations of the conference by making connections and identifying common as well as contrasting themes.”

Kraly began her professorship by reading widely, mentoring graduates, and preparing seminars — the first of which consider recent strides at the United Nations in global migration governance and responsibility sharing concerning refugees.

Her yearlong post emphasizes the formation of long-lasting relationships with the institute, and Kraly particularly enjoys her involvement with graduate and postdoctoral students. Her background as co-editor of the volume The Demography of Refugee and Forced Migration and editor of the peer-reviewed journal International Migration Review helps in providing feedback on their research and project proposals. She believes her background in the liberal arts and interdisciplinarity of the Colgate curriculum has particularly aided her in this mentorship.

The position is so joyful. I have the privilege of sharing space with highly committed people, creative and welcoming …

Kraly still holds frequent conference calls for her current positions as chair of the Scientific Panel on International Migration of the International Union for the Scientific Study of Population and as co-director for the National Academy of Sciences Workshop on Forced Migration: From Theory to Practice in Promoting Migrant Well-Being. She will also continue her own research related to role of migration research and analysis in the implementation of the United Nations Compact for Safe, Orderly and Regular Migration.

“Alerting students to different perspectives and vantages on human migration flows from seamlessly from Colgate, the Core and university studies,” Kraly said.

Kraly feels the demanding environment, filled with individuals doing cutting-edge research in the field of migration will make her a better teacher-scholar back at Colgate.

“I will be able to talk to students about different models of graduate education and illustrate interdisciplinarity within the context of migration studies with real examples — particularly dissertations, papers, and research projects,” Kraly said.

The city of Malmö donated the funds for the IMER guest professorship in 1998 in celebration of the founding of the university. The professorship honors Willy Brandt, West Germany’s chancellor from 1969 to 1974. Brandt sought refuge in Sweden during World War II and stood for social justice issues and effective governance. Since 2007, the professorship has been located at the Malmö Institute for Studies of Migration (MIM).

“The position is so joyful. I have the privilege of sharing space with highly committed people, creative and welcoming, and not just the people in the migration institute but also the people in the city of Malmö,” Kraly said. “As I walk to work, I am smiling.”