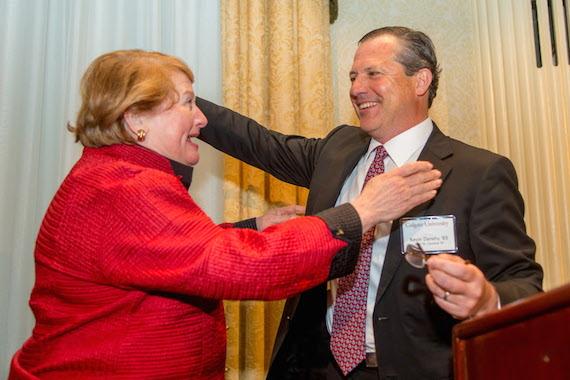 The 50th Anniversary of the Presidents’ Club. (Photo by Lorenzo Ciniglio.)

When Colgate’s Presidents’ Club was founded, the university’s endowment was approximately $12 million, and the giving society had 93 members whose generosity would help modernize the university. Fifty years later, the coffer holds more than 50 times that amount, and there are 30 times more members.

Today the Presidents’ Club is much more than a giving society. It’s a collection of generous alumni, families, and friends — representing all ages, career fields, and giving capacities — who are dedicated to advancing the university. The club creates educational and career opportunities for students on campus and around the world. For example, it partners with Colgate’s Center for Career Services to bring new life to campus events such as Homecoming.

Speaking at the Presidents’ Club’s 50th anniversary event on May 3 at the Waldorf Astoria hotel in New York City, Denis Cronin ’69, P’09,’10, chair of the Colgate Board of Trustees, expressed his gratitude and admiration. Colgate moves ever forward because of “resilience, grit, and the will to succeed,” he said. “That is the secret sauce.”

Among the attendees celebrating a half a century of Colgate love and lore was Dorothy Fullam P’08 of Princeton, N.J., widow of Walter Fullam ’32, who attended the first Presidents’ Club event back in 1965, also held at the Waldorf. Frank Lawatsch ’43, the oldest living Presidents’ Club member, also was there.

Colgate’s 11th president Tom Bartlett GP’15, whose grandson Tom Bartlett ’15 will graduate in May, marked his 46th year of personal connection to Colgate and Hamilton. “This kind of continuity is a joy to be a part of.”

Amy Everett DiSibio ’86 P’18, incoming Presidents’ Club leader, looked into the future, noting the growing number of “incredibly young alumni members. They will be the leaders who take the Presidents’ Club to its 100th anniversary,” she said.

The Presidents’ Club has seen the strongest membership growth among its recent alumni group, securing more than 200 new members this year from classes 2005-2014. New giving levels have helped in this regard, as has a $100 giving level for alumni enrolled full-time in graduate school.

Kevin Danehy ’83, P’16,’19, outgoing president of the Presidents’ Club, also talked about growth. “As we’ve grown, our mission has evolved. So today, in addition to leadership-level donor recognition, the Presidents’ Club looks to create and sustain opportunities for lifelong connectedness with the Colgate community, from matriculation through graduation.

And speaking of connectedness, Danehy presented a surprise award to Colgate staffer Patty Caprio, who has supported leadership giving at Colgate for 40 years. Serving under six university presidents, she has become “unofficial divisional historian and archivist,” he said. When Danehy called Caprio to the stage to recount her long list of accomplishments on Colgate’s behalf — including her 1989 Maroon Citation, 1994 Silver Puck Award, an endowed scholarship in her name, and most recently the naming of a space in honor of Patty and her husband, Joe, in Colgate’s new athletics facility — she received a standing ovation.

Then, Danehy announced a new honor: dedication of the Patricia Doyle Caprio Presidents’ Club Leadership Reception Center, which will support relationship building, leadership development, and career path exploration. The center, funded with a lead gift from Jill and Paul ’64 Kaneb, will be located within Colgate’s future 16,000-sq.-ft. Center for Career Services.

More images from the event: