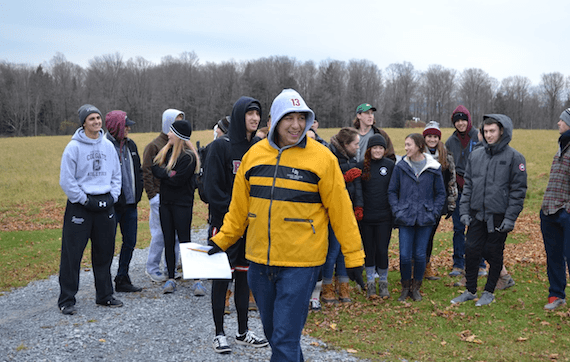 Jacob Stoil explains the rules of engagement to the red team at a PCON war-game simulation. (Photo by Karen Harpp)

Two teams of students, one armed with phones and the other commanding flying drones, squared off in a simulated strategic battle of quick thinking versus in-depth planning and technology at the Colgate Bewkes Center, a space designed for science and study.

The pedagogical goals of the November 13 simulation were many, said Jacob Stoil, visiting instructor in peace and conflict studies. “This was a good test for bringing experiential learning and technology together in order to help students understand some of the complexities of field operations, and the importance of planning and doctrine,” he said. “Students now have an appreciation and deeper understanding of many of the issues encountered in class.”

The blue team of about 35 students had structure and technology on their side. Kevin Lynch, chief information officer at Colgate, who also served in the U.S. Air Force as a communication and information officer, helped set up the mobile command center in the back of a U-Haul.

In stark contrast, the red team consisted of about 30 students who represented an insurgent-style group that lacked organizational structure and had only the technology they carried. They purposely didn’t have advance planning, and they had no strategy until they were on the ground.

Before the simulation, Niall Henderson ’16, a peace and conflict studies major and blue team ground commander in the field, said, “I’m looking forward to seeing how our plans play out in action, and to see if we can be as flexible as we need to be while maintaining organization.”

The students were from different PCON classes, including Weapons and War, a class taught by Karen Harpp and Nancy Ries, along with introductory PCON courses. The simulation was designed specifically to get students thinking about things like terrain, weather, and war planning: all things they are studying in class.

Manny Medina ’17, a sociology and education major on the red team,  said, “The simulation challenged me to apply the different strategies and methods of mobilization and infiltration that we learned from studying different wars.”

In times of war and peace, technology has to be reliable in order to make difference.

Within the first 30 minutes, the blue team experienced technical difficulties with the drones, which impacted their communication structure. With little intelligence about the whereabouts of the red team, they abandoned their hi-tech headquarters and went into the field. The takeaway from members of the blue team was that technology was great, but there needed to be a back-up plan.

The red team won handily, 17-4, using just their mobile phones and a GroupMe chat application that allowed for decentralized communication.

Summing up one of the lessons learned, Stoli said, “Technology should be thought of as a gift, not a certainty.”