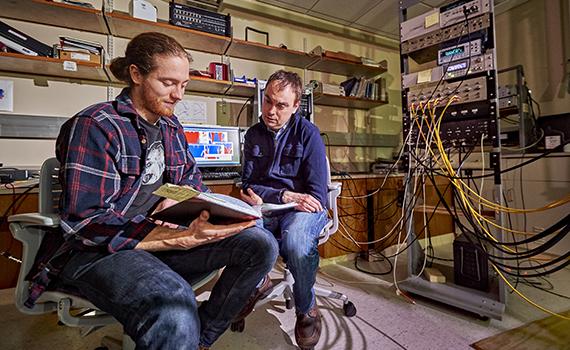 Matt LeGro ’15 and Professor Ken Segall are using helium in their research studying the behavior of Josephson junctions (small electrical circuits) to see if they can model neuron behaviors in the brain. Photo by Andrew Daddio Matt LeGro ’15 and Professor Ken Segall are using helium in their research studying the behavior of Josephson junctions (small electrical circuits) to see if they can model neuron behaviors in the brain. Photo by Andrew Daddio

Party balloons can no longer be taken for granted: there’s a worldwide shortage of helium. Prices quadrupled between 2000 and 2012, according to the U.S. Government Accountability Office. But a new helium-recovery system will put Colgate’s science laboratories at the forefront of efforts to conserve the dwindling supply of this increasingly expensive gas.

One of the world’s critical and finite raw materials, helium is the second-lightest element and is chemically unreactive. It has a boiling point just 4 degrees above absolute zero, making it ideal for cooling superconducting metals. When those metals are cooled below a critical temperature, their resistance drops to zero. As a result, huge currents can flow through without heat loss. The magnetic fields that result from these currents can be used for research or for medical imaging in MRI machines.

Because of these special properties, physicists and chemists on campus use approximately 2,000 liters of liquid helium annually as a refrigerant to conduct cutting-edge research at low temperatures. During the process, the liquid boils off and escapes into the atmosphere in gaseous form.

“The cylinders are really expensive, and once we use the helium, it is gone,” said Ken Segall, associate professor of physics and chair of the physics and astronomy department.

Segall and his student Matt LeGro ’15 are using helium in studying the behavior of networks of Josephson junctions. Powered by superconducting currents and cooled by helium, Josephson junctions are small electrical circuits that are used for sensing applications, digital processors and electrical standards. Because they also have a unique pulsing behavior, Segall is studying them to possibly model neuron behaviors in the brain.

“Compared to both traditional computer simulations and biological neural networks, Josephson junction neurons would be orders of magnitude faster,” Segall explained. “This research will be a stepping-stone to understanding larger regions of the brain with a wide range of potential applications. For example, in brain-inspired computer learning, processors might be able to complete tasks like group identification and sift through data at a faster rate.”

The new equipment — which includes a liquefier and a recovery system — will collect the evaporated helium gas and condense it back into liquid. The liquid will then be stored in special cylinders and transported back to laboratories for re-use, hence creating little or no waste.

Although the full system, located at the dock of the Ho Science Center, costs about $125,000, the savings will be significant. “[It] should pay itself off in five or six years,” Segall said.

Hoping to publish a paper by the end of the spring semester, Segall will continue his commitment to sustainable and innovative research.