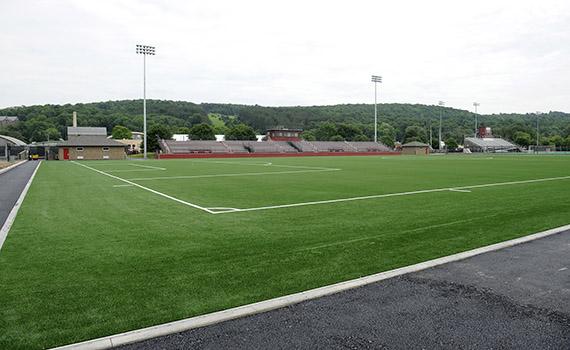 A view of Beyer-Small ’76 Field. (Photo by Bob Cornell) A view of Beyer-Small ’76 Field. (Photo by Bob Cornell)

When Colgate’s championship-winning soccer teams return to competition this fall, they will play on a new field that reflects their skill and commitment to the beautiful game.

The new stadium, located near Andy Kerr Stadium and Tyler’s Field, also pays tribute to the life-changing connections that can develop between student-athletes and coaches. The latest addition to the Raiders facilities roster, Beyer-Small ’76 Field, will be named for two Hall of Honor members: retired Colgate soccer head coach John Beyer and Colgate trustee Barry Small ’76, a former soccer and baseball student-athlete.

Their partnership on the field spanned four seasons between 1972 and 1975, and it forged a lasting relationship that is the hallmark of a great Colgate experience.

“We could not be more excited to name this first-class facility after two extraordinary people who have meant so much to our athletic department, our university, and our community,” said Colgate Director of Athletics Victoria M. Chun ’91, MA’94.

Small earned his All-America Second Team honors while serving as team captain during his senior year of 1975. The four-year letter winner ended his Colgate tenure fourth on the school chart in career goals (with 22) and third in points (with 48). Twice, the National Soccer Coaches Association of America named him All-New York Region. He also lettered three years in baseball as the starting center fielder.

Small majored in economics at Colgate, and after wrapping up his professional soccer career, he joined the original Weeden & Co. in 1978. He went on to co-found the new Weeden & Co. LP in 1986, and after serving as head of equities trading, he became president and chief executive officer in 1995. Today, he is chairman emeritus of Weeden Securities Corporation and chairman of Pragma Weeden Holdings, LLC.

In 2006, Small was instrumental in the establishment of the John Beyer Endowed Coaching Chair for Men’s Soccer, named in his mentor’s honor.

Beyer-Small ’76 Field features TV-standard lighting; a fully functioning press box with rooftop camera deck; home and visiting team rooms, which include public restrooms; seating for 1,300 fans; and a FIFA 2-certified FieldTurf playing surface that is approved for use in World Cup-qualifying matches. The university’s 9/11 memorial, originally dedicated on September 13, 2003, will be relocated to the new facility.

“John and Barry embody the qualities we strive to instill in our student-athletes: hard work, an unwavering commitment to Colgate, and a burning passion for what you do,” said Chun. “Soon, we will see those qualities in action on Beyer-Small Field.”

The university also thanks the Van Doren family for its support of Van Doren Field, home of Colgate soccer for 17 years.