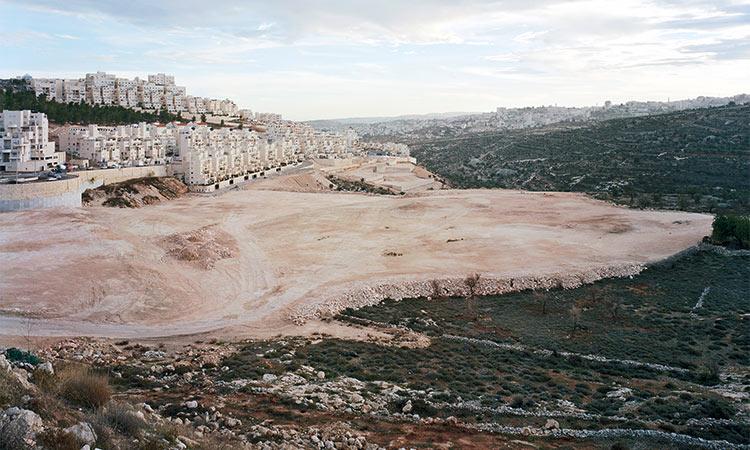 An image from the upcoming opening of This Place at Colgate. By Thomas Struth, Har Homa, East Jerusalem, 2009. Archival pigment print. © Thomas Struth.

A major exhibition of photographs, This Place explores Israel and the West Bank “as place and metaphor” through the eyes of 12 internationally acclaimed artists. Because the exhibition is divided among four collegiate art galleries, it has presented a perfect opportunity for museum studies students to apply what they’ve learned outside of the classroom.

Professor Elizabeth Marlowe, the founder of Colgate’s new museum studies minor, is using This Place as a focal point in her course Museum Exhibitions: Design, Rhetoric, and Interpretation. The first stop of the four-museum tour was the Wellin Museum of Art at Hamilton College.

Frédéric Brenner, the French initiator of This Place, spoke to Colgate and Hamilton College students in the Wellin on March 8. Matt Brogan, the project’s director, also spoke and answered questions about the works on display.

Brenner’s work features portraits of families that the artist got to know while visiting Israel and the West Bank. One photograph, The Aslan Levi Family (2010), features a family whose serious expressions seem to mask internal conflicts. Brenner chose to display the image without a descriptive label so that the family’s situation would remain mysterious to the viewer.

When a Colgate student asked Brenner if he feels any responsibility toward the people he photographs, he responded: “I see what they are wrestling with, and I cannot betray them. After all, photography is an act of love.”

A few weeks later, Marlowe’s class piled back in a bus to visit the Tang Teaching Museum at Skidmore College before moving on to the University Art Museum at SUNY Albany. At each museum, Marlowe asked her students to explore the displays in groups of two or three, find something interesting, and then speak about it to the rest of the class.

“Visiting the other three portions of This Place has revealed confusing questions of authorship for me,” history major Erin Burke ’18 said. “All of the exhibitions were provided with standardized wall texts, but I have learned that curators can override those standardized text panels to create new meanings for the show.”

A semester-long topic of discussion has been the controversial nature of This Place: the show has been criticized for featuring many American and European photographers, but no Israelis or Palestinians. This absence raises questions about neo-colonialism and Islamophobia, among other things.

Each museum did something to address the controversy. The Wellin Museum contains a classroom space called WellinWorks where critical dialogue occurs alongside This Place. The museum at SUNY Albany mounted contextualizing object labels written by an art history student and set out a binder where visitors could write down their opinions of the show.

For its part, Colgate invited several scholars to campus to speak on the complicated issues at hand. Visitors have included Ian Lustick, a University of Pennsylvania professor who specializes in the history and politics of the Middle East. Lustick gave a talk called “In Place, Out of Place, Out of Space: Palestinians and Jews in the West Bank” on March 29.

“It has been interesting to see what each of the other schools has done with this exhibition, as well as how they used the gallery spaces available to them,” said physics major Zoe Sale ’18.