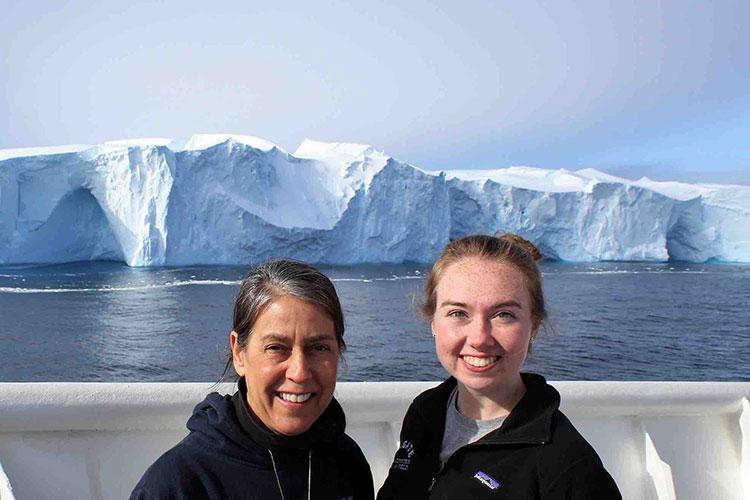 Many Colgate students take a semester during their junior year to study in some of the world’s most remarkable places. However, few will study in a location as remote as the Sabrina Coast of Antarctica. That’s where Meghan Duffy ’18 spent the spring with geology professor Amy Leventer aboard the Australian ocean research vessel RV Investigator, conducting paleoclimate research.

Since Duffy’s first year at Colgate, she has studied microfossils in ocean sediment with Leventer. Because of their size and rapid turnover rate, microfossils provide a clear representation of changes in Earth’s climate. As the assemblages of these species changes in sediment, scientists are able to make inferences about how the climate has changed over millions of years. On board the Investigator, Leventer and Duffy collected sediments from the ocean floor, sampled the sediments, and prepared them for future analysis. The samples were obtained by coring into the seabed with a special hollow steel pipe, which then filled with layers of sediment. The resulting sample is referred to as a core, and contains sediment in chronological order of its deposit on the ocean floor.

In a post on the ship’s blog, Duffy commented on the significance of collecting her own samples. “Before this trip, all of my work started with opening a drawer in a lab in New York and taking my samples from carefully labeled bags,” she wrote. “I am very grateful for the opportunity to take part in the entire process of retrieving sediments from the ocean floor, taking samples from the cores, and preparing them for further analysis back in the lab.”

A typical day for Duffy involved a 12-hour shift, beginning at 2 a.m. and ending at 2 p.m. Besides research work, other shipboard tasks included maintaining the ship’s log and whale watching. “Whenever the seismic team was mapping the ocean floor, we had to watch out for whales coming within five hundred meters of the ship,” Duffy said. “I spent half an hour every day whale watching, and probably saw more than one hundred Humpbacks. If a whale ventured within the five hundred meter radius, international law dictated that all seismic activity pause until the whale moved away.”

Other highlights on board the 308-foot Investigator included the polar lights that emerged when the days became shorter as well as beautiful arrays of stars. Duffy also found both personal and professional pleasure in working and living with a talented team of scientists from all over the world.

Now back on land, Duffy and Leventer have begun the long process of analyzing the samples they have collected. Duffy, who will begin her senior year this fall, has already started work on her thesis. She hopes to attend graduate school in geology after Colgate.

For more information on Duffy and Leventer’s journey, visit the voyage website.