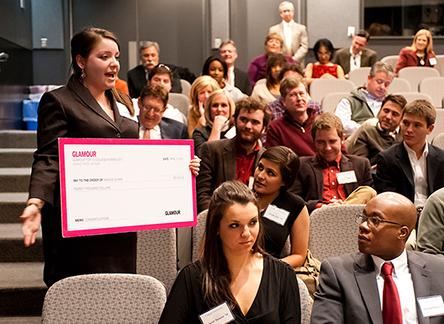 As winner of the 2012 grand prize in Glamour magazine’s Top 10 College Women Competition, she received $20,000 for the work she has accomplished through her nonprofit Lakota Pine Ridge Children’s Enrichment Project. At the ceremony, she announced that she would donate the prize to her organization, and leverage its prestige to raise even more money. Opportunity landed a few weeks later, when Sir Richard Branson visited Colgate. Branson was the keynote speaker for Entrepreneur Weekend, a time for Dunne and other students in the university’s Thought Into Action Institute to showcase their ideas.

During a Q&A session with Branson, the consummate entrepreneur, Dunne boldly introduced herself and asked how she might use her Glamour prize money to motivate humanitarian celebrities to donate to her cause. She held up the oversized check she happened to have brought with her.

To Dunne’s amazement, and that of everyone in the room, Branson agreed to match Glamour’s $20,000 award through his nonprofit Virgin Unite, provided she could secure another $20,000 from a certain prominent Colgate alumnus, who wishes to remain anonymous. So Dunne steeled herself for another big ask.

Now, with two CEO donations and the Glamour prize in hand, Dunne’s recent awards total $60,000. To sustain the momentum, she has added a donation link to her website and hopes to raise another $20,000 from the community at large.

“Maggie Dunne’s passion for her work is evident and her success is measurable,” said Branson. “She has made a difference in the lives of thousands of Lakota children and deserves a chance to do more. It is my pleasure to support her work.”

Dunne first met the children of the Pine Ridge Reservation in South Dakota during a volunteer trip during high school in Scarsdale, NY. She started small, with a local coat drive and modest fundraising, and today her organization has distributed more than $100,000 worth of coats, boots, and books to members of the Oglala Lakota Sioux Tribe who live there.

At Colgate, Dunne is a Native American studies major. In and out of the classroom she has found many students who want to get involved. Through the Center for Outreach and Volunteer Education (COVE) she held campus fundraisers and started and staffed a summer camp on the reservation. Through the university’s Thought Into Action Institute, she received invaluable advice from dozens of successful alumni who return to campus to teach students to create jobs for themselves through entrepreneurial means.

Dunne’s experience and concern reaches beyond the Native American populations. She has spent summers in Bangladesh, learning the language and working with the Grameen Bank, the microfinance organization that gives small loans to the poor. In 2011 she received the Newman Civic Fellowship for “promising college student leaders who have demonstrated an investment in finding solutions for challenges facing communities throughout the country.”

Follow Dunne’s progress here and help her meet her goal.