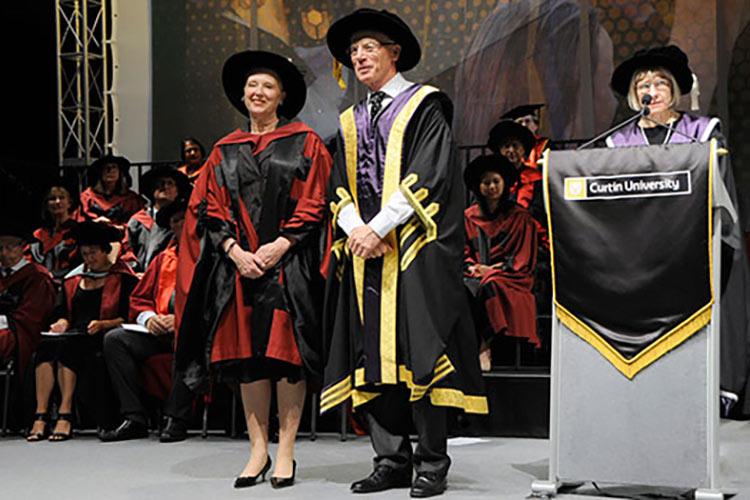 The journey of a hundred artworks begins with a single person.

Ellen Percy Kraly, William R. Kenan Jr. Professor of geography and environmental studies, has been awarded an honorary doctorate by Australia’s Curtin University in recognition of her efforts to repatriate an invaluable collection of Noongar aboriginal art to its home Down Under.

Noongar children, taken from their parents and placed at the Carrolup Native Settlement, created the pastel paintings during the late 1940s. Art collector Herbert Mayer ’29 subsequently purchased a group of the works in London — he donated them to Colgate in the 1960s.

Australian art scholar Howard Morphy discovered the collection in storage at the Picker Art Gallery in 2004. During the next nine years, Kraly worked with colleagues at home and across western Australia to return the art. She also helped to strengthen Colgate’s extended study programs in the region so that students could engage with Australia’s Noongar peoples, their culture, and their history.

On Thursday, February 18, Kraly addressed the graduates of Curtin University’s School of Media, Culture and Creative Arts; School of Design and Art; and Centre for Aboriginal Studies. She encouraged them to think intentionally about the “how” as well as the “what” as they planned the next steps on their life journeys.

Having shaped a crucial cultural exchange between two universities on opposite sides of the globe, Kraly offered a suggestion.

“The ‘how,’ I hope, is with energy, vitality, and an entrepreneurial spirit,” she said. “I would encourage each of you to unleash the force of the arts within our communities and throughout the world to bring people together, to confront, contest, and commune with each other over ideas, interpretations, and insights.”

Curtin University awarded Kraly her new doctorate for taking a walkabout on what she’s talking about. “Without Professor Kraly’s foresight, action, and generosity, the [Noongar] collection may never have come home,” said Curtin Vice Chancellor Deborah Terry in a recent statement.

After completing the transfer, Curtin was able to send works from the collection on tour throughout the Great Southern Region. Just days before Kraly received her honorary degree, Australia’s Department of Aboriginal Affairs transferred additional art and historical documents to add to the university’s holdings.

Kraly’s visit to Curtin last month will not be her last. She will continue to lead extended study trips in conjunction with courses like GEOG 327 Australia’s Stolen Generations: The Legacies Of Carrolup.