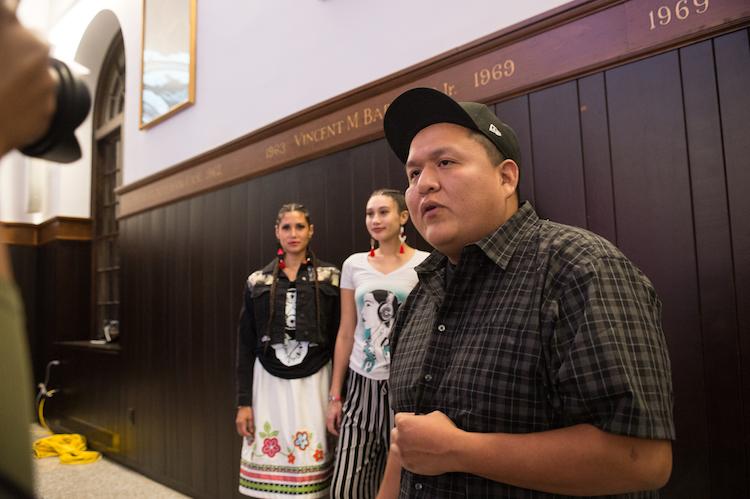 Jared Yazzie discusses the inspiration behind the designs

“Sometimes,” said Jared Yazzie, owner of OXDX Clothing and artist-in-residence at Colgate, “we need to pull back and remember our culture, tradition, and those who have sacrificed before us.” It’s a motto he follows as a member of the Navajo Nation and as a fashion designer.

November 8–10, the Longyear Museum of Anthropology welcomed Yazzie to campus as part of the Not a Costume exhibit (open through December 16, 2018), which analyzes issues of cultural assumptions, appropriation, and identity of contemporary Indigenous fashion of the Western Hemisphere.

“We wanted to bring a contemporary Native American fashion designer — to have a workshop tailored to indigenous community members and a residency culminating in a fashion show,” said Christy DeLair, curator at the Longyear Museum of Anthropology.

On November 8, during a panel discussion for the Colgate community, Jared Yazzie and Jessica Metcalfe — owner of the online fashion platform and blog Beyond Buckskin — discussed Yazzie’s passion for his work as well as current Native American fashion and social issues impacting the community.

According to Yazzie, appropriation of Native American art is one of the leading issues derailing the progress of many Native American fashion designers. His own garments infuse his grandmother’s designs, important cultural symbols, and elements of Navajo history. It would be disheartening, says Yazzie, if these designs were stolen by other brands.

On November 9, during a fashion show in the Hall of Presidents, Yazzie presented garments from his fashion line to the larger Colgate community and visitors from off campus. The event showcased various traditional regalia — both street and high fashion — worn by Native American models. Metcalfe discussed the history and inspiration behind each piece at length to educate the audience throughout the show.

“The designs were really visually intriguing but they became so much more captivating once I learned the story behind each [garment] and the process of its creation,” said Andre Stephenson ’18. “The show itself left me with a greater appreciation for Indigenous fashion and history.”