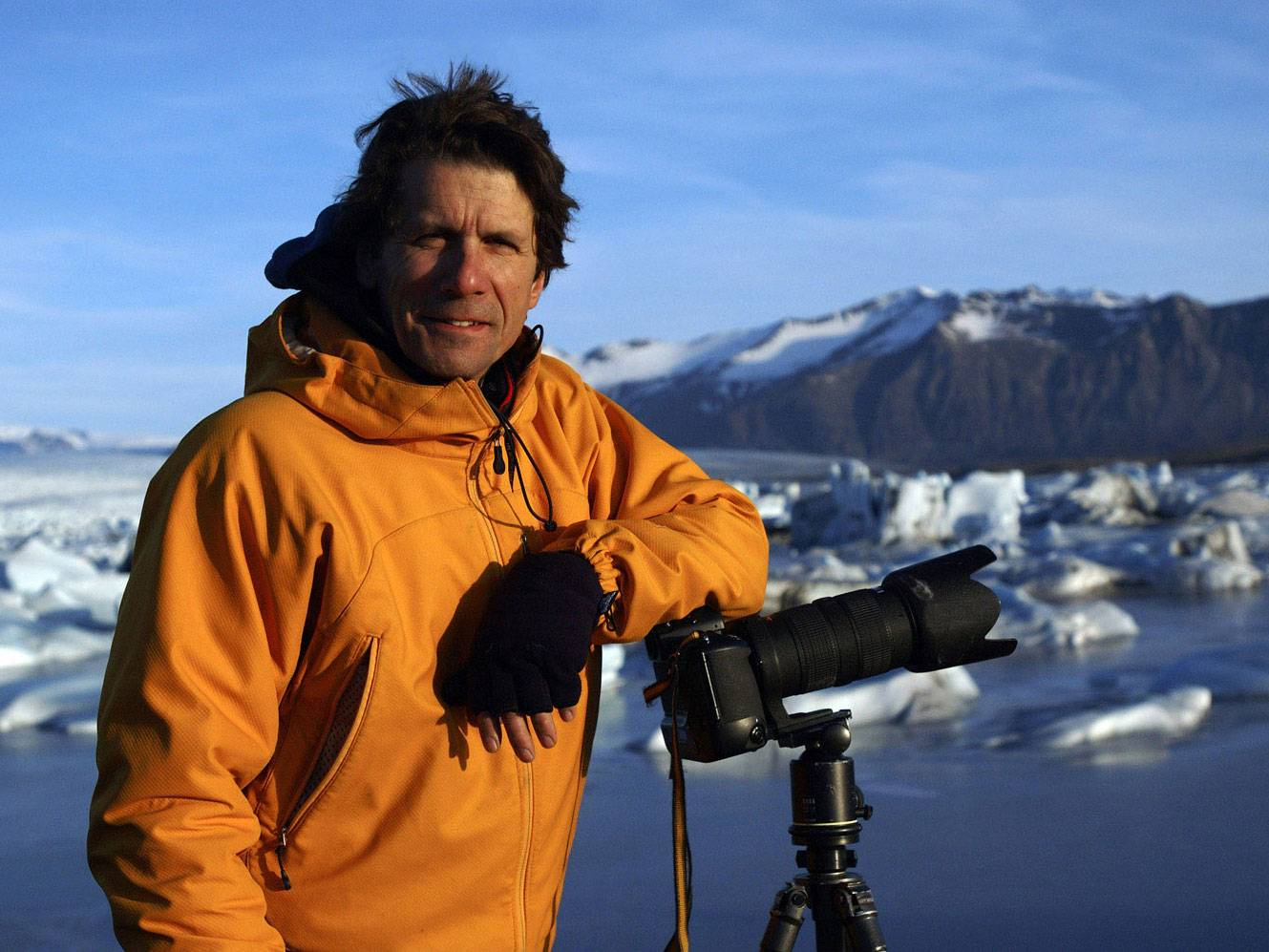 On Friday, April 15, environmentalist, photographer, and climate change expert James Balog P’24 presented on his experiences documenting climate change and the human modification of nature. The hybrid event was co-sponsored by the Division of Natural Sciences and Mathematics Colloquium Series and the Environmental Studies Brown Bag Series.

Balog drew on two key terms from his latest book, The Human Element: A Time Capsule from the Anthropocene. The first was “human tectonics,” a theory of human-environment interaction that Balog has been working to popularize throughout his career.

“Human tectonics is the force that our eight billion people, our technologies, and our desire for affluence and survival exert on the planet,” Balog says. “Humanity has a profound impact on our environment, and that level of force deserves a name.”

The second key term that Balog delved into was the Anthropocene, the current epoch of geologic time in which human activity is having a significant impact on the planet’s climate and ecosystems.

“The notion of the Anthropocene is simply that the force of humanity is so intense that it is forming the character of geologic time right now. Humanity is literally shaping Earth as we know it,” Balog explained.

Through a joint exploration of human tectonics and the Anthropocene, Balog has concluded that the environment can no longer be understood in terms of just the four main elements (earth, wind, water, and fire), but rather that a fifth element is now necessary to truly understand it: human beings.

Balog illustrated the impact of humans on the environment through a series of more than 50 of his own photographs as well as clips from his award-nominated 2018 film, The Human Element.

One clip documents the efforts of California firefighters to put out the 2016 Soberanes forest fire. On screen, planes fly low over the blazing landscape, attempting to smother the rapidly spreading fires. On the ground, Balog, dressed in firefighting gear, captures the efforts of individual firefighters as they wade through ash and smoke to suppress smaller blazes.

As a resident of Boulder, Colo., where wildfires are so prevalent that they have been given their own season, Balog is all too familiar with the dangers of flame.

In recent decades, the fire season in the western United States has grown longer and more intense as a result of the warming climate, and Balog made underscored the cause-and-effect relationship.

“There is a very distinct relationship between the warming of the atmosphere and the frequency of wildfires. This has been well documented, it’s not an abstraction, and it’s not a computer model. It’s empirical evidence on the ground,” Balog said.

One of the most striking images that Balog shared was of a school bus that had been partially incinerated in a fire outside of Boulder in 2010. The blaze had been so intense that the red and yellow lights on the bus melted and dripped down its exterior.

“I have found the fires to be incredibly terrifying, violent, and upsetting, but at the same time, they’re insanely beautiful. The four years that we spent shooting the wildfires and those fighting them was some of the most interesting work of my life,” Balog said.

From Fire to Ice

Balog then shifted his focus from fire to ice in order to share his experiences capturing the polar ice caps on film before they disappear.

“These big masses of ice that appear to be dead, slow-moving, dumb, and static are actually almost alive,” Balog said. “They are incredibly responsive to environmental conditions and respond sometimes on an hourly and daily basis to the heat sources around them.”

To show just how drastically the glacial landscape is changing, Balog shared a video clip from his 2019 film, Chasing Ice, featuring dozens of glacial structures and a seemingly endless expanse of ice. After acquainting the audience with a few of his favorite structures — such as “Birthday Canyon” — he revealed that nearly all have melted.

“Glacial melt matters because all that water that was once frozen on land in the form of ice is winding up in the ocean and causing sea levels to rise. More water in the ocean means greater coastal erosion and flooding, more intense storms, and a whole host of other problems that will change the world as we know it,” said Balog.  “If ice melt continues at the rate that it is now, the ocean of our children will be drastically different from the ocean that we take for granted today.”

Finally, Balog shared with the audience his time working with and photographing animals like the late Coco the Gorilla, who became world-famous after learning how to communicate with her handlers through sign language.

As Balog photographed Coco, and particularly after he dared to look her in the eyes, he began to recognize that humans and animals are not so different from one another.

“From my experiences with the animal kingdom, I have learned that there is a lot of intelligence and possibility in nature that is simply untapped. That may not be a scientific observation, but deep down I feel that it is true.”

Balog left his audience with a message of hope and a challenge to do better for our world.

“Everything that we have created as homo sapiens with this three-pound brain in our head is simply an invention. It’s all made up, the good, the bad, and the indifferent,” said Balog. “Our opportunity as human beings is always to make up good things instead of crazy things. We have that capability, and now more than ever before, we need to make use of it.”