An immersion in public arts and humanities 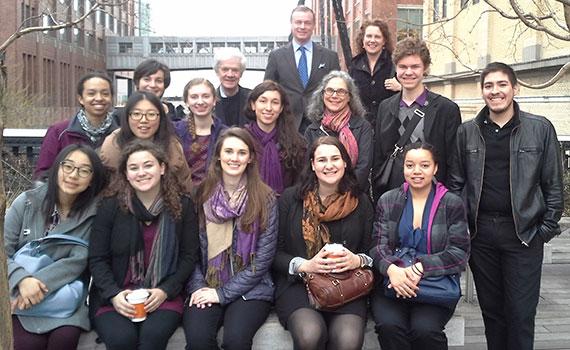 Editor’s note: Last spring, Miranda Gilgore ’18 took part in Colgate’s public arts and humanities immersion trip to New York City. As she prepares for her summer months as a camp counselor in the Adirondacks, Gilgore reflected on the experience and how it has changed her outlook on her majors, her hobbies, and her long-term career planning.

A marble-tiled museum, a pretty show with nice music and gorgeous costumes, an old house that used to belong to a wealthy family. That’s what a lot of people would probably think of when they heard a definition of ‘public humanities,’ the work of individuals and organizations to provide community access to the arts, history, philosophy, and more.

I did, too, before going on the public arts and humanities immersion trip to New York City, sponsored by Jim Smith ’70 and Robert Dorf ’80, during Spring Break 2016. From March 13 to 16, I traveled with 11 other Colgate students and two professors to NYC in order to bridge the gap between our academic experiences in the humanities and the “real world.” Prior to departure, we had a seminar class to discuss articles and case studies regarding nonprofits related to the arts and humanities, and we also met to discuss trip logistics.

Thinking deeply about dance performances, museum exhibitions, archive center holdings, theater performances — all of which we did in fact deeply engage in during the trip — opened up the doors to some amazing discoveries.

During the pre-trip workshop and on the trip itself, I was able to think through many steps involved in the process of building a new performing arts center or installing a museum exhibition. I engaged with diverse questions of humanities funding, storytelling, copyright law in the digital age, and proper storage of archival material.

At the Metropolitan Museum of Art, I discovered that museum exhibits are an aggregation of work done by historians, artists, engineers, and accountants, among many others. By visiting the Highline, an above-ground park that uses old train tracks as its structure, I discovered a way in which recycling or repurposing can be done on a large scale and the several positive effects that a project like the Highline can have on a city. By synthesizing my own interesting discoveries and the conversations we had as a group, I discovered that I am drawn to narratives and how the arts and humanities tell stories in diverse ways.

The discoveries didn’t stop at the things that were brand new to me. For example, having been a dancer for 14 years, I knew that music choice was important in the creation of show, but seeing the Stephen Petronio Company dance performance and talking to Petronio himself after the show pushed me to think about the role of music in dance even more critically — of the three pieces we saw performed, one had no music, one had a combination of quiet music and talking, and one had very intense music. I realized that sometimes music is meant to complement already existing choreography, instead of the other way around, and also that music doesn’t have to be a part of every dance performance.

As a German major at Colgate, I have clear ties with the humanities world. Yet, my interests lie largely in creating an environmentally sustainable world, as evidenced by my intended second major in environmental geography. Happily, I observed that there are so many different kinds of job opportunities in the public humanities — not just for the artist, actor, and dancer, but also for the marketer who tells the world about an event; the scientist who knows exactly what climatic conditions are appropriate for a museum exhibition; and the engineer who builds the stage, the set, or the display. Of course (and maybe this is my bias), there’s room for a director of sustainability in there, too.

One of the things that the trip helped me appreciate most about the public arts and humanities is that they incorporate many different types of non-humanities career paths into the work of bringing the humanities to the public. One can pursue the humanities while also pursuing a seemingly unrelated career.

So what are the takeaways I have from this trip? Things are a lot more involved (and cooler) than they look on the surface. The humanities are really valuable for how we tell our story. And, as I start to think about careers, I will be more attuned to the discoveries that piqued my interest during the trip.