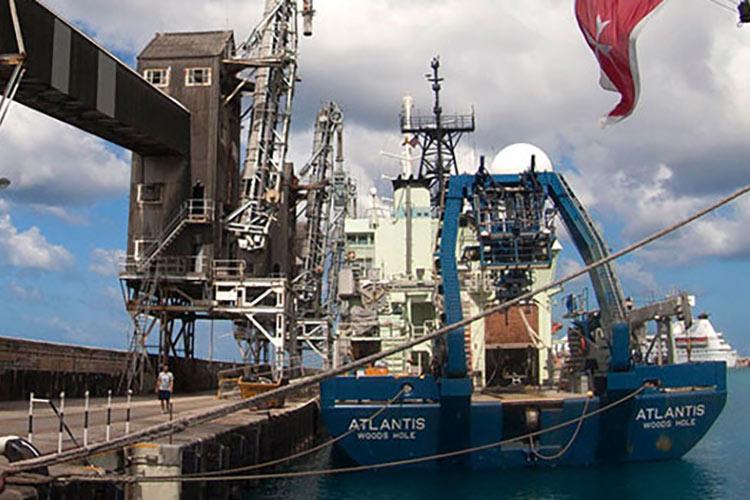 Editor’s note: Hannah Bercovici ’17, a geology major from Woodbridge, Conn., is the only undergraduate member of the science party aboard the research vessel Atlantis, currently cruising over the Mid-Atlantic Ridge, somewhere around the 14th parallel north. Bercovici and her colleagues from the Woods Hole Oceanographic Institution are hunting for seafloor basalt — “popping rocks” that could give insights into the volatile (gaseous) composition of Earth’s mantle. We asked Hannah to give us a snapshot of her life on Atlantis, and she obliged with this note to the Colgate community.

On board, the day starts at every hour.

One person will be eating breakfast as another is settling in for bed, and you get that mid-afternoon feeling at 2 a.m. because you’ve only been awake since 8 p.m. As a member of the science party, I’ve gotten pretty lucky with my sleep schedule. While in transit from Bridgetown, Barbados, to the Mid-Atlantic Ridge, I was on the 8–12 watch. I would wake up at 8 a.m. and work until 12 p.m., and then have eight hours off. At 8 p.m., I would start watch again. During watch, we would record information about the gravimeter (detects the local gravity), the magnetometer (detects the local magnetic signature), and the multibeam system that lives under the hull (uses sonar pulses to determine bathymetry, the topography of the ocean floor). We would also get to go outside during the day to record information about sargassum, a type of seaweed that is found in the Atlantic near the equator. When we weren’t logging information, my watchmates and I would read short stories to each other. Ernest Hemingway and Shirley Jackson joined us during our watches, making the four days of transit pass quickly.

My job at the moment is making maps with the program GMT, which stands for Generic Mapping Tools. One map I make shows the target locations for the next Alvin dive, which basically makes it easier for Alvin to find spots on the Mid-Atlantic Ridge that would be interesting. It’s like giving the pilot directions for the excursion. The maps I make the most are for after Alvin dives. I plot the locations of the samples collected by Alvin and the track that Alvin took on the seafloor. This is important for seeing the samples in relation to each other and to the trackline.

Meanwhile, the media team goes through hundreds of photos and videos taken by Alvin and picks through them, and the rock team handles the samples brought to the surface.

During our breaks, we go to the bow of the ship (named Steel Beach by the crew) to hang out. Steel Beach has railings that are solid sheets of steel that prevent you from falling overboard. They are also at the perfect angle for leaning against. I hook my head on the rounded top of the rail and stare down at the ocean, which changes form every single day. Sometimes it’s bright blue and the waves sparkle as they reflect the sun. Some days, like today, the waves are a mosaic of a thousand different surfaces, all changing too fast to reflect anything.