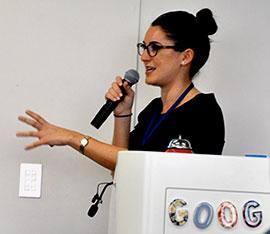 (Editor’s Note: Colgate has a professional network committed to helping students and alumni discover careers in the digital media and technology fields.)

In her eight years with Google, Debra LoCastro ’05 has risen from sales associate to university programs lead. She manages the student outreach team, helping students learn about career opportunities at Google.

She recently visited Colgate for a series of workshops and networking sessions with students. She took a moment to share her ideas on how the tech world, and companies like Google, find value in liberal arts degrees, like those offered at Colgate.

Q: Why is Google interested in students with liberal arts degrees? A: I think Google is interested in students with liberal arts degrees because they value the kind of exposure that these students have across various fields of study. So, when I was at Colgate I majored in psychology, but I also took classes in math and statistics. Liberal arts schools encourage students to bring those types of studies together so that you’re not just learning about them alone, but rather in cross-study, which mimic real-world applications.

Q: How does a liberal arts degree fit into the tech and business world?

A: Having exposure across fields is an indicator of success in the business world. For example, at Google I started out in advertising sales. Having an understanding of psychological behavior and being able to build relationships, while also having experience in math and being able to crunch numbers quickly, was very important.

Q: How are liberal arts degrees viewed in the application process in relation to other degrees at Google?

A: I work with liberal arts students to help them understand the opportunities we offer at Google in addition to engineering (such as advertising sales and people operations). For non-engineering roles, we evaluate liberal arts degrees just as we would an undergraduate business degree.

Q: What are some of the things you were involved with on campus, and how did they help you in your career today?

A: I worked with the Breast Cancer Awareness Coalition, and was a member of Kappa Kappa Gamma. I also volunteered with the elderly at Madison Lane Apartments and did research in a psychology lab.

While none of the specific things I did on campus foreshadowed me working in people operations on our student outreach team, I was consistently passionate about helping people, building relationships, and promoting good causes. Now, I’m promoting Google, which I think is a very good cause, while constantly meeting new people and building relationships with students, faculty, and administrators throughout the country.