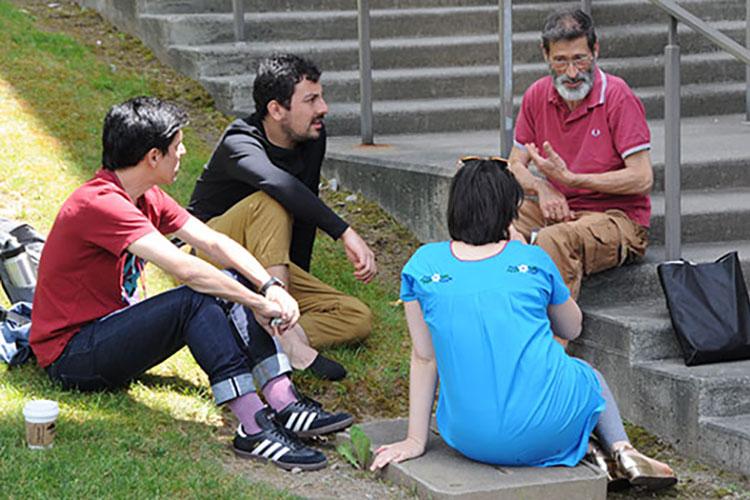 They came. They saw. They confabbed — on culture and identity politics, the ethical responsibilities of a documentarian, and the proper balance of race and ethnicity in a program lineup. Then, the 170 attendees of this year’s Flaherty Film Seminar, held at Colgate from June 18 to 24, disbanded.

For the university — Flaherty’s home base during the past nine summers — that’s just the trailer. The full story plays out during the fall and spring semesters, because six to eight Colgate professors have also had the opportunity to attended the seminar each year, meeting filmmakers and broadening their understanding of the international documentary film landscape.

“We’re using those contacts to integrate film into our courses,” said Mary Simonson, assistant professor of film and media studies and women’s studies.

Simonson, for one, uses the Flaherty submission Lovely Andrea, by Hito Steyerl, to engage students in conversation about intellectual property and ethics. Flaherty films also end up exactly where you would expect: in courses like introduction to film and media studies and The Documentary Impulse, taught by Ani Maitra, assistant professor of global film and media.

“I’ve used astounding shorts and features that my students and I would not have seen otherwise,” Maitra said. “These ongoing conversations [at the Flaherty Seminar] have proven to be very rewarding, both in terms of future programming at Colgate and my own research on transnational and diasporic visual cultures.”

“Flaherty extends the boundaries of our documentary knowledge,” Simonson added. “For example, watching the curators’ approach has changed how I think about gender and race representation when programming Colgate’s Alternative Cinema and Friday Night Film Series,” Simonson said.

The university also provides scholarships for one to three high-achieving film and media studies students interested in participating in the seminar. Dan Kwartler ’15 was on hand in 2013 and now works as an editorial coordinator at TED.

“Flaherty was my first experience at an academic conference,” Kwartler said. “Coming out the other side intact played directly into my remaining time in the film and media studies department, which I spent pursuing a thesis outside of department mandate and working with Professor Penny Lane on her (now award-winning) film Nuts!”

Consequently, Kwartler’s first academic conference wasn’t his last. “My time at Flaherty helped prepare me to present one of my papers at the annual Society for Cinema and Media Studies conference at Notre Dame,” he said. “I likely wouldn’t have pursued speaking at the conference had I not seen the value of hearing from the wonderful media academics who presented at the Flaherty.”

Matt LaPaglia ’17, a history major from Cicero, N.Y., was around the Flaherty table in 2015. “I came to understand that, by pursuing filmmaking, I would not only be entering into a profession or an industry,” he said, “but I would also be entering into a community of brilliant people.”

That community has come home to Colgate every summer since 2008, drawn in by the combination of technology resources, human capital, and scenic beauty that attracts many undergraduates. Colgate maintains the 8mm, 16mm, and 35mm projection equipment that the seminar needs for its screenings. It features an IT staff that can provide constant support. And the Chenango Valley is a perfect setting for inspiration, reflection, and conversation.

“Part of the allure of the seminar is that you’re taken out of your normal context, and you can focus on the movies and people around you,” said Lane, who was attending the seminar even before she joined the Colgate faculty.

The last frames in the 2016 seminar showcase didn’t end the Flaherty’s connection with Colgate this year. Thanks to the Colgate/Flaherty Distinguished Global Filmmaker Residency program, Flaherty programmers will be back on campus during the fall semester, accompanied by filmmaker and 2016 fellow Sandra Kogut. Together, they will engage with students in classroom conversations, film screenings, project critiques, dinnertime discussions, and more — making the reach and impact of the Flaherty/Colgate partnership even more real.