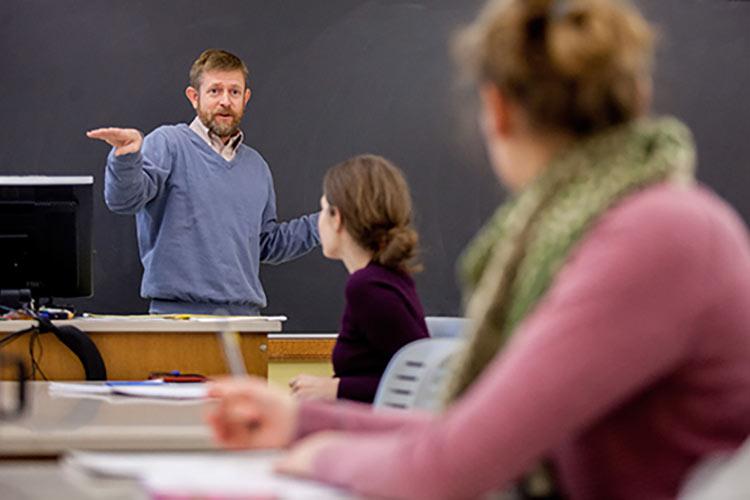 Colgate Professor Tim McCay teaches a course on zoology. He is one of several Colgate professors receiving grant funding in 2015-2016.

Colgate’s Picker Interdisciplinary Science Institute continues its mission of supporting innovative research with four new grants for 2016. The special funding is designed to help bring together Colgate faculty with outside researchers from around the world in an effort to open new areas of study, and to find creative ways to tackle existing problems.

This year’s slate of Picker ISI funding has been awarded to:

Ahmet Ay, assistant professor of biology and mathematics Ay and his collaborator Ertugrul Ozbudak, of the Albert Einstein College of Medicine, have been awarded $107,392 for their project “Interdisciplinary Investigation of the Vertebral Segmentation Clock.” The gene regulatory network instructing development of the vertebral column has remained elusive. Expression of multiple genes display dynamic waves in the precursor cells, which are primed to differentiate into the vertebrae disks. This project will combine computational methods for modeling large-scale systems with molecular perturbation techniques in the laboratory to pin down the gene regulatory circuit controlling segmentation of vertebral disks during embryonic development.

Jessica Graybill, associate professor of geography and director of Russian & Eurasian studies Graybill and her collaborators Andrey Petrov, of the University of Northern Iowa, and Gleb Kraev, of Moscow State University, have received a one-year award of $37,430 for their project “Tundra Tracks: Mapping Community and Carbon Mobilities in the Russian Arctic.” Vehicle tracks have a long-term impact on the tundra in Arctic Russia. Unused tracks remain recognizable from satellite images 40 years after creation. The tracks damage plant cover, compact and disengage soil layers, and change energy and matter fluxes. Their large-scale impact on climate is unknown. They are also intertwined with human activity and community in these regions. This project will explore how carbon fluxes vary on or near tracks, how the tracks vary in density and distribution, and how their presence interacts with nearby human communities.

Michael Loranty, assistant professor of geography, and Heather Kropp, a postdoctoral research associate Loranty and Kropp, along with their collaborators Nick Rutter, of Northumbria University, UK, and Chris Fletcher, of the University of Waterloo, Calif., have received a two-year award of $136,545 for their project “Impacts of boreal climate feedbacks on climate change.” Boreal forests represent approximately one-fifth of the Northern Hemisphere land surface and strongly influence global climate. Declines in the duration and extent of seasonal snow cover across the boreal region increases the absorption of solar radiation, which amplifies climate warming. The strength of this positive feedback varies widely between climate models because it is difficult to represent complex snow-forest-climate interactions. This project will confront climate model representations with field measurements and satellite observations of boreal forest-snow energy dynamics. The researchers aim to improve the understanding and climate model representation of interactions between boreal forest structure, snow cover, and climate dynamics. Read more about Loranty’s Arctic research in the Colgate Scene.

Tim McCay, professor of biology and environmental studies; Damhnait McHugh, Raab family chair and professor of biology, and Ahmet Ay, assistant professor of biology and mathematics McCay, McHugh, and Ay have received a two-year award of $152,907 for their project “An Interdisciplinary Approach to Understanding Ongoing Biological Invasions by Crazy Worms (Amynthas) in North America.” Earthworms of the genus Amynthas are rapidly invading North America from Asia. These large, lively worms (aka “Crazy Worms”) have major effects on the ecosystems they invade, but we know very little about their basic biology and potential for spread. This project will integrate fieldwork, lab experiments, molecular analyses, and mathematical modeling to reveal the life history and physiological tolerances of these earthworms, reconstruct their historical invasion of North America, and make predictive statements about their spread and impact. The goal is to learn enough about Amynthas to inform management strategies for these invasive species.