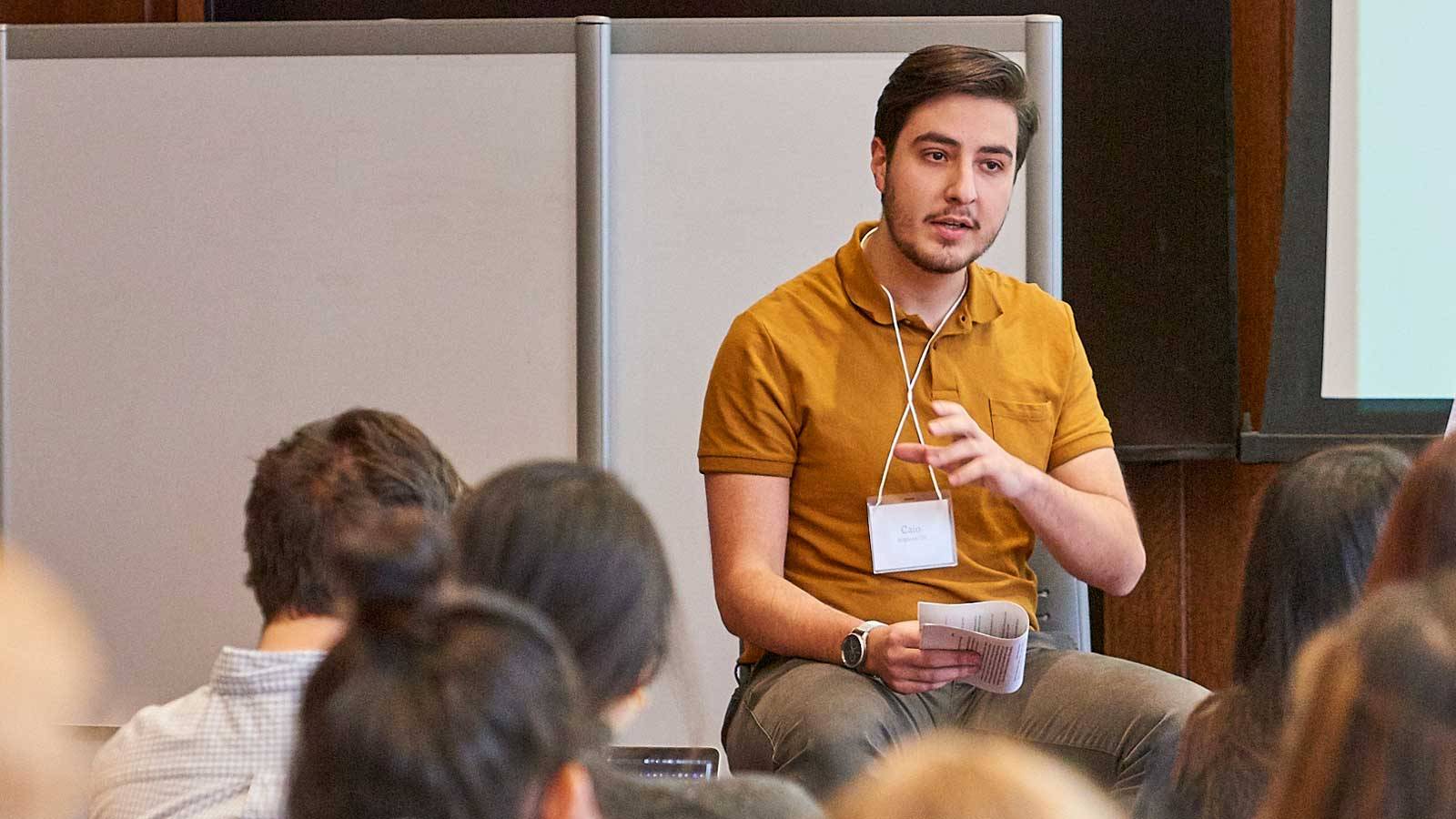 Caio Brighenti ’20 has programmed a virtual "Boo-Meter" for the NFL draft. (Photo by Andrew Daddio)

Football fans are known for being vocal about their team’s choices. Their opinions are strongly voiced at the annual NFL draft, when fans watch potential draftees and their families gather together to listen to NFL commissioner Roger Goodell announce each selection. This year, the draft was held remotely, rather than in Las Vegas as originally planned.

Caio Brighenti ’20 noticed one crucial thing that would be missing from this year’s remote draft — NFL fans’ booing and cheering. So, he put a pin in his senior thesis to craft an online “boo-meter,” which gauges whether fans were virtually cheering or booing at each pick.

Nowhere are fans more open about voicing their opinions than the internet, especially on the website Reddit. Brighenti’s program takes NFL fans’ reactions and comments on Reddit and analyzes how each team’s fan base is reacting in real time.

“The program pulls every new comment posted to the general NFL and team-specific pages of Reddit, which I analyze using a sentiment analysis tool to measure whether the comment is ‘angry/sad’ or ‘happy/excited.’ Essentially, this indicates how each fanbase is feeling in real time,” Brighenti says.

Brighenti, a computer science and peace and conflict studies double major hailing from São Paulo, Brazil, has a history of combining his interests in football and coding. Last season, he was a finalist in the NFL’s Big Data Bowl, competing by himself against many teams of multiple opponents. As a finalist, he received the opportunity to present his findings to spectators at an annual trade show in Indianapolis, many of whom were NFL executives.

Brighenti, a Detroit Lions fan, sees the internet, and social media in particular, as the supreme vessel for judging fans’ gut reactions to a pick. Though he conceived of the idea prior to the draft moving online, his program is more telling now than ever, as fans cannot gather in large groups to react to the draft as usual.

During the draft, Brighenti used 33 distinct meters to gauge reactions: one for each team as well as one dedicated to the controversial NFL commissioner, affectionately titled the “Goodell Boo-Meter,” which recorded more than 80 boos in the first 30 seconds following Goodell’s first appearance on screen.

“When I first decided to do this project, I wasn’t sure if any sentiment analysis tool would really be able to capture how a fanbase feels,” Brighenti admits. “However, it was actually a really good way to measure how fans were feeling. What you’d expect to see from each pick was perfectly translated to how the meters reacted.” Though many NFL fans tune in just for the first few picks, Brighenti’s program showed that fan reactions were strong throughout the entire draft, even as picks approached the hundreds in later rounds.

“One interesting thing to witness was when the meter would completely flip from one direction to another,” Brighenti remarks. “San Francisco 49ers fans, for instance, were incredibly excited that Jerry Jeudy and CeeDee Lamb, the two best wide receiver prospects in the draft, were still available to them at pick 14, but the meter went from being maxed out positively to negatively in mere seconds when the 49ers took a defensive tackle instead.”

As it turns out, social distancing hasn’t changed the behavior for which NFL fans are most well known: making their opinions on their team’s plays and trades heard loud and clear.