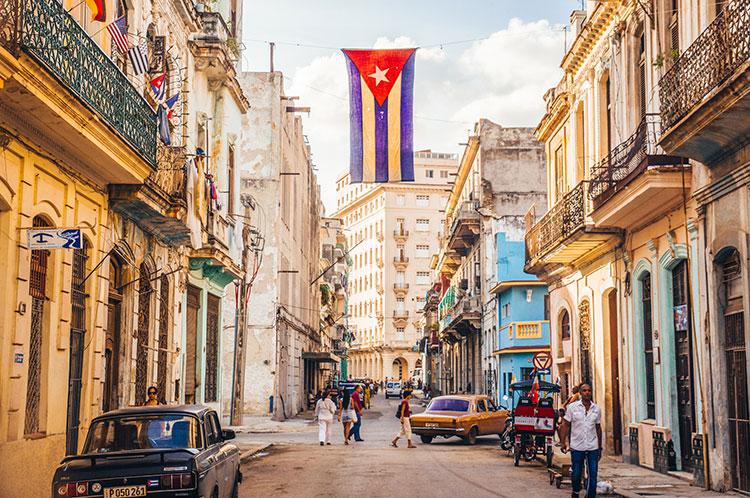 Next winter break, students will travel to Havana, Cuba, for three weeks as part of Colgate’s first credit-bearing extended study trip to the island. Led by Professor Laura Klugherz, the trip will be the culmination of the Core 198 course Cuba: History, Culture, and Life.

Klugherz held an information session on April 30 in the Office of Off-Campus Study for students accepted to the program. To provide a student perspective, Anna Santiago ’18 spoke about her experience studying in Cuba during the fall 2016 semester with a non-Colgate program.

Santiago, a peace and conflict studies (PCON) and Spanish double major from Arlington, Va., shared photos and stories from her three months in Havana. She lived with a host family and went to classes at the Universidad de La Habana in partnership with IFSA-Butler.

“As a PCON major, being able to walk through a city where so much history has taken place, and is still taking place, is fascinating,” Santiago said.

This past March, Santiago was invited to speak about her experiences in Havana at the annual conference of the Forum on Education Abroad during a panel called “Education Abroad in Uncertain Times: Case Study Cuba.”

Once a major tourism destination for Americans, Cuba was essentially closed to U.S. citizens from 1959 until 2014, when Presidents Barack Obama and Fidel Castro loosened travel restrictions between the United States and the island.

Next year, Klugherz and her students will visit museums, attend musical performances, and hear guest lectures in order to learn about the long history of Havana as a global city. Excursions will include two colonial cities, a sugar central, and a tobacco vega. Students’ research topics in Core Cuba will inform the topics explored while abroad.

Like Santiago, Klugherz’s students will live in casas particulares, or host homes, and share meals with their host families in order to immerse themselves in the culture. Housing, excursions, and student support will be organized by IFSA-Butler, which has been operating in Cuba since 2000.

Enrollment in Core Cuba is a prerequisite for the extended study program, as is a minimum of two semesters of Spanish language training.

“Cuban Spanish is one of the hardest Spanish dialects to understand and speak,” Santiago said. “But being able to come back confident in my language abilities was so worth it.”