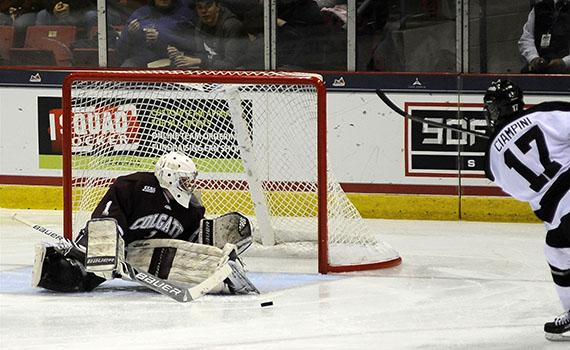 Colgate earned its fifth NCAA postseason appearance in program history as the Raiders are headed to Cincinnati for NCAA regionals.

Colgate is a No. 3 seed in the Midwest Regional and takes on second-seeded Ferris State this Friday at 4:30 p.m. Eastern time (ESPN3). Top-seeded Wisconsin meets fourth-seeded North Dakota in the second game at  Cincinnati’s U.S. Bank Arena.

The Raiders (20-13-5) are meeting Ferris State (28-10-3) for the fourth time this season, with Colgate owning a 2-1 record over the Bulldogs of the Western Collegiate Hockey Association. Both Colgate victories were shutouts, including a 3-0 win to capture the Mariucci Classic in Minneapolis in early January.

Colgate reached 20 wins for the 10th time in program history with its 3-2, double-overtime victory Friday night against Quinnipiac in the ECAC Hockey semifinals in Lake Placid. The Raiders fell short against Union in the title game on Saturday night.

Hundreds of Colgate students and alumni had flocked to Herb Brooks Arena to cheer on the Raiders during the weekend,  and the championship game took place in front of a total crowd of 4,850 fans.

The Raiders are one of three teams from ECAC Hockey playing in the NCAA tournament. Union is the top seed in the East Regional in Bridgeport, Conn. The Dutchmen are joined by second-seeded Quinnipiac in the same regional.