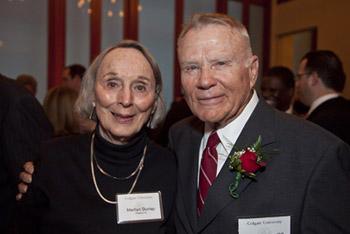 Fred ’50 and Marilyn Dunlap in New York City on April 4.

When Colgate fans flood into Andy Kerr Stadium to watch a football game, they sit in the Fred Dunlap Stands. When the Raiders win a Patriot League football championship, they hoist the Fred Dunlap Trophy. Now, thanks to a new endowment created in honor of that legendary coach and athletic director, Colgate’s team will be led by the Fred ’50 and Marilyn Dunlap Endowed Chair for Football.

Fred ’50 and Marilyn Dunlap in New York City on April 4.

The coaching chair, built by 20 alumni and friends, was officially inaugurated on April 4 at a gala celebration in New York City, attended by players, coaches, and supporters — past and present. The endowment marks a new era in Colgate football and a boost for the university’s athletics program, which benefits from the $2 million fund.

“The endowment of the Dunlap head coaching position signifies the tremendous respect that generations of alumni have for coach Dunlap and the community,” said President Jeffrey Herbst. “It is also important when hundreds of Colgate alumni come together to support both football and athletics at the university.”

Trustee and former offensive tackle Daniel Hurwitz ’86 spearheaded the effort, raising support at a record-setting pace during the opening weeks of the spring semester. “The speed with which we completed the initiative is a credit to the Dunlaps,” said Hurwitz. “It is simply an emphatic ‘thank you’ that will live on in perpetuity — just like the life lessons we all learned from Coach and Mrs D. during our stay in the Chenango Valley.”

The honor is the latest for Dunlap, a Maroon Citation winner and recipient of the Wm. Brian Little ’64 Award for Distinguished Service to Colgate, who oversaw 77 victories during his years as head football coach (1976–87) and supervised the construction of Sanford Field House as director of athletics (1976–1992).

“Everyone who played at Colgate really holds Fred and Marilyn in the highest esteem for how much they influenced their lives,” said current director of athletics Dave Roach.

Green Bay Packers CEO and former Colgate athletic director Mark Murphy ’77 was one of those players. He underscored his esteem and Dunlap’s influence in his remarks to the crowd. “Fred came in when I was a senior,” Murphy said. “That season was really a great lesson for me on how you coach a team, how you manage people, and how you lead an organization that I use to this day.”

Current head coach Dick Biddle, the winningest football coach in university history, will serve as the inaugural Dunlap chair-holder. Coach Biddle was Dunlap’s defense coordinator and line coach from 1977 through 1983. “He really allowed me to coach and taught me how to handle players at a great academic school,” Biddle said. “He always preached that the players were the most important thing, and those are the things that I have tried to take with me.”

A formal campus dedication and inauguration of the Fred ’50 and Marilyn Dunlap Endowed Chair for Football will take place at Andy Kerr Stadium on November 3, following the Raiders match vs. Lafayette.