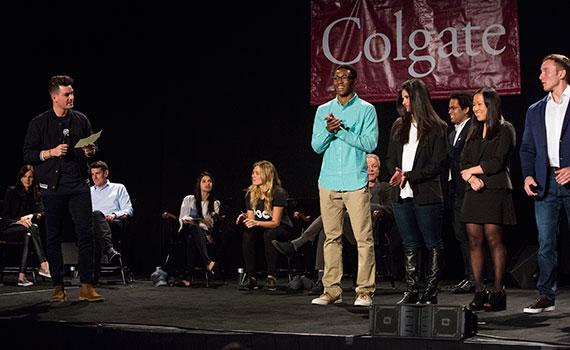 True grit is more than a classic western. It’s the stuff of great start-ups.

For students interested in acting on the desire to run their own start-ups, McNeill broke the process down into a series of steps: identify a pain point or need in the market, then decide if there is a market for the product that would fill that need, and calculate the potential profit margins.

“But then there’s a big step in courage if you discover that the market looks cool,” McNeill said. “That’s actually going and doing it, and that’s where ninety-nine percent of ideas go to die.”

Panelists began the event as advisers, offering insights into the successes and failures they’ve tallied to date while encouraging students to take that big step. Then, they became judges, listening to pitches from Thought Into Action students competing for a cut of $20,000 in venture capital funding.

After delivering their pitches and answering a series of questions from the pros, the students split a $20,000 pool of capital that will help them move their ventures forward.

The audience also met the alumni council’s 2016 Entrepreneur of the Year award winner, John Levisay ’89, who is CEO of Sympoz/Craftsy. In his five years with the online craft education company, Levisay has taken Craftsy through five rounds of funding, totaling $100 million, and increased staff from four employees to more than 250.

Prior to the Friday-night keynote, panelists spoke in small groups with students interested in entrepreneurship and working with start-ups. On Saturday, students were once again in the spotlight as Thought Into Action participants presented their products and services to parents, alumni, and friends in the Hall of Presidents.

“It’s not often that these sorts of events happen, and it constantly reinforces the strength and impact of the Colgate network,” said event attendee Connor Wybranowski ’18. “My biggest takeaway was to be persistent in the pursuit of knowledge and experience, no matter where you find yourself in life.”