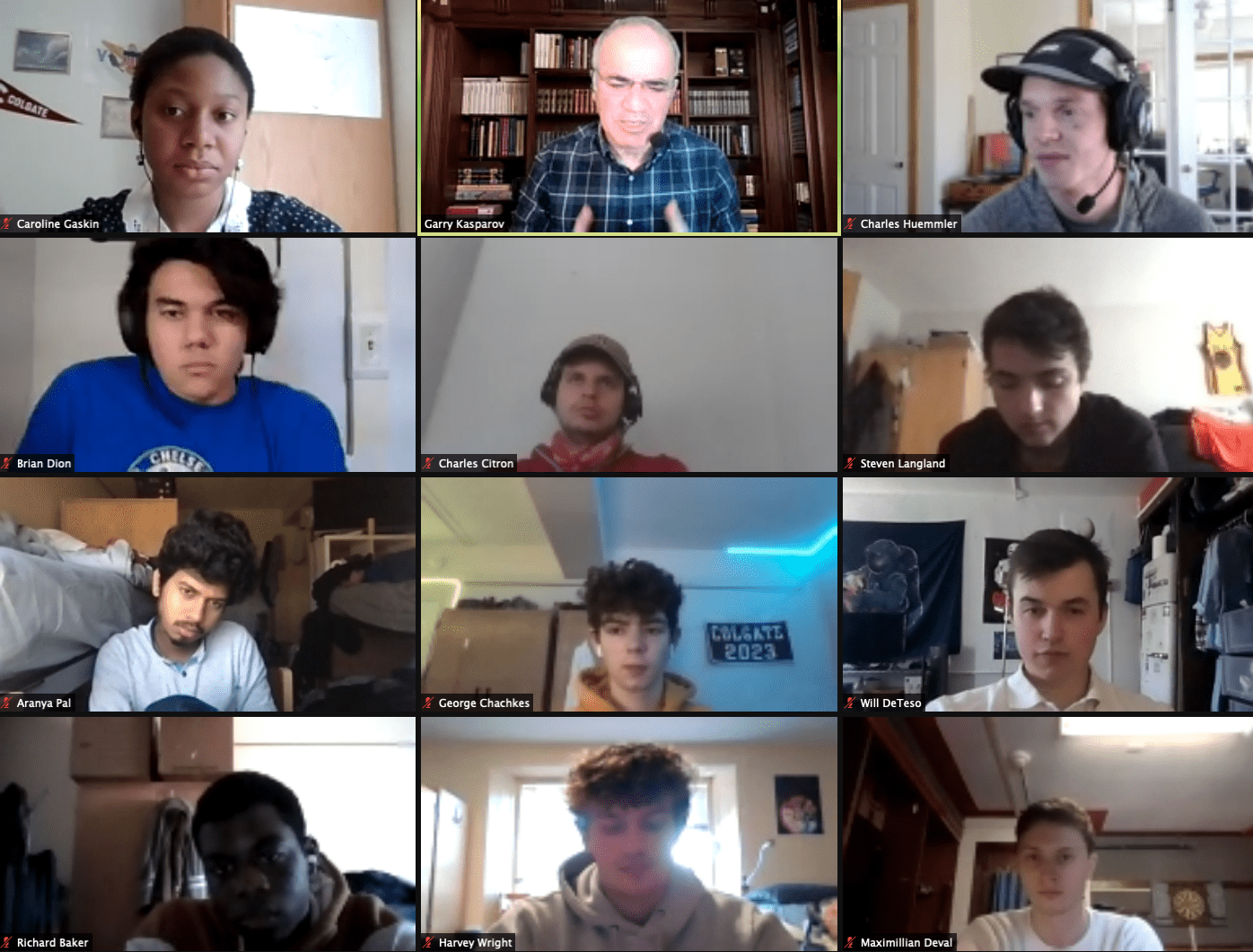 Garry Kasparov, one of the world’s greatest chess champions of all time, answered questions and talked at length about his experiences as a pro-democracy activist in a special virtual Q+A forum this week.

More than two dozen Colgate students joined with Kasparov, who was live via Zoom from Croatia, for a wide-ranging discussion on topics related to chess, political activism, and the future of artificial intelligence. Kasparov, who held the title of world chess champion from 1984 until his retirement in 2005, remains passionate about the game and its potential as a tool for young students to hone cognitive skills of critical thinking and creativity.

“Everything that happens in your life, it’s up to you to change and improve,” Kasparov said. “Yes, an opponent might be stronger today, but instead of blaming the opponent or the circumstances, it’s better to look inside and see what you did wrong. That’s an important lesson. It’s not just about winning and losing, it’s about making the difference. That means, you always have to come back the next day to improve your own game.”

Outside of chess, Kasparov shared the story of a day he sees as one of the most pivotal is his life. Kasparov’s worldview changed on Nov. 10, 1985, when he became the youngest-ever world chess champion, a title he would hold until reigning champion Magnus Carlson became the youngest champion in 2010.

“Not just because I became the youngest world champion. Not just because of the feeling that the sky was the limit, and I beat my predecessor Anthony Karpov, who was 10 years older than me,” Kaspaorov shared. “Amidst all of these congratulations and hugs and kisses, I was approached by Rona Petrosian, the wife of former champion Tigran Petrosian, one of my mentors. Instead of saying all these nice and trivial things, she said, ‘Young man, I feel sorry for you because the happiest day of your life has just passed.’”

Kasparov said he was shocked, but it wasn’t until later that he realized the power of the statement. He had climbed the chess ladder to become world champion at just 22 years old, and now he had to decide what the rest of his life would look like.

“Can you imagine? I recognized that maybe she was right. But that was the best gift I could receive that day. It gave me a purpose in life to prove her wrong. To be the best in the world at 22, what’s next?” Kasparov said.

For Kasparov, next would be dominating the world chess scene for more than 20 years, followed by a move into the political realm, where he angered Russian authorities to the point of his pending arrest and flight to the United States.

“I wanted to explore other ways of making a difference,” Kasparov said. “I entered, what people mistakenly called, politics. In Russia — in Putin’s Russia — it was about fighting for human rights. In chess, we have fixed rules and unpredictable results. In Putin’s Russia, it’s exactly opposite. The rules change all the time, and the results stay the same. Under threat of imminent arrest, I had to leave Russia eight years ago.”

While Kasporov is still an important voice for the pro-democracy movement, he is also a frequent thought leader in the realm of computer artificial intelligence, something he faced in his competitions with IBM’s Deep Blue supercomputer. Kasparov also shared his chess knowledge as a consultant for the hit Netflix show The Queen’s Gambit.

Students asked questions about the possibilities of changing the standard starting positions in the game to force more creative competitive play in tournaments, the future of human and machine intelligence interactions, and the prospects for democracy in places currently struggling against authoritarian leadership.