Colgate celebrates groundbreakings for Benton Hall and Class of 1965 Arena 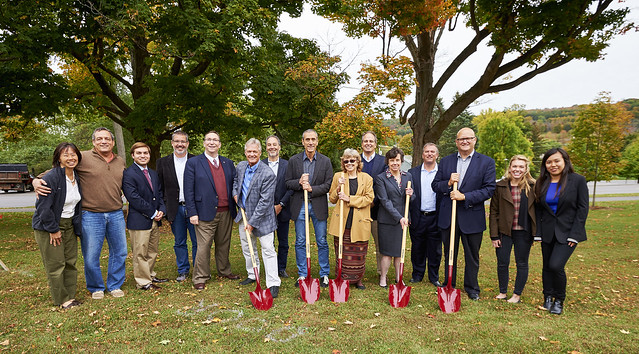 Colgate University community members came together last week to break ground on two facilities that will transform students’ experiences in two key areas: preparation for success after Colgate and athletics. In separate ceremonies held on Friday afternoon, students, faculty, staff, trustees, and other supporters turned shovels and applauded the creation of Benton Hall and the Class of 1965 Arena.

Both the arena and Benton Hall were funded primarily by gifts from alumni, parents, and friends — individuals and groups who understand that the Colgate experience begins in the classroom and extends to lessons learned up and down the hill, through Division I competition, intensive career exploration internships, and the development of lifelong relationships.

Nestled just below the Academic Quad, near the Hurwitz Admission Center in James B. Colgate Hall, Benton Hall will be the new home of Colgate’s career services efforts, the Office of Undergraduate Studies, and the first-generation initiative.

“Buildings are symbols at universities,” said namesake Daniel Benton ’80, P’10, H’10. “I want to say thank you to the Colgate community for giving Benton Hall a location of prominence, recognizing that it underscores the significance of student outcomes and distinguishes us with prospective students, parents, and employers.”

The Class of 1965 Arena and Riggs Rink will replace Starr Rink as the home of Colgate hockey. It will also house offices and locker rooms for men’s and women’s lacrosse, soccer, and ice hockey.

During a ceremony at what will soon be center ice, key supporters buried 13 pucks and $13. Trustee and former Athletic Affairs Committee chair Michael J. Herling ’79, P’08,’10,’12 noted that the arena was “a long time coming. But standing here is awe inspiring,” he said.

He reminded the audience that the arena affirmed two core beliefs in the university’s strategic plan for athletics: “our belief in the educational value of athletics and that intercollegiate athletics help promote character traits valuable to personal development and success — at Colgate and beyond.”

“I pray that Colgate’s student athletes will work to maximize their potential both in the classroom and on the rink,” said trustee William A. Johnston ’73. “I think we all share the excitement of anticipating when this facility opens.”

“It takes enormous commitment to get to the point where we are today,” said Daniel B. Hurwitz ’86, P’17, chair of the Board of Trustees. “It takes commitment from our alumni — and from many who are not alumni — who generously supported the buildings we’re here to celebrate.” Hurwitz also thanked faculty, administrators, coaches, and students for their daily determination. “It is amazing how easy our students make the hard work we do for the university — they make it easy because they’re spectacular.”

Hard work by architects and construction crews will ensure that the Class of 1965 Arena is ready for the first game of the 2016 hockey season next October. Benton Hall will open its doors later the same year, in December 2016.

“As we build Colgate for our next century, these two projects scream to our core: we want it all,” said trustee Stephen J. Errico ’85, P’16,’18, an investor in both facilities. “We want excellent academics, high-quality athletics, and a fantastic career for the students who come through here. It’s an ambitious goal, but it’s what makes Colgate so unique.”

“We walk the paths that hundreds of thousands have walked before us, yet at the same time, we evolve and change,” said Interim President Jill Harsin. “Every structure we build is a pledge to the future, a renewed physical commitment to this campus that we love so well.”