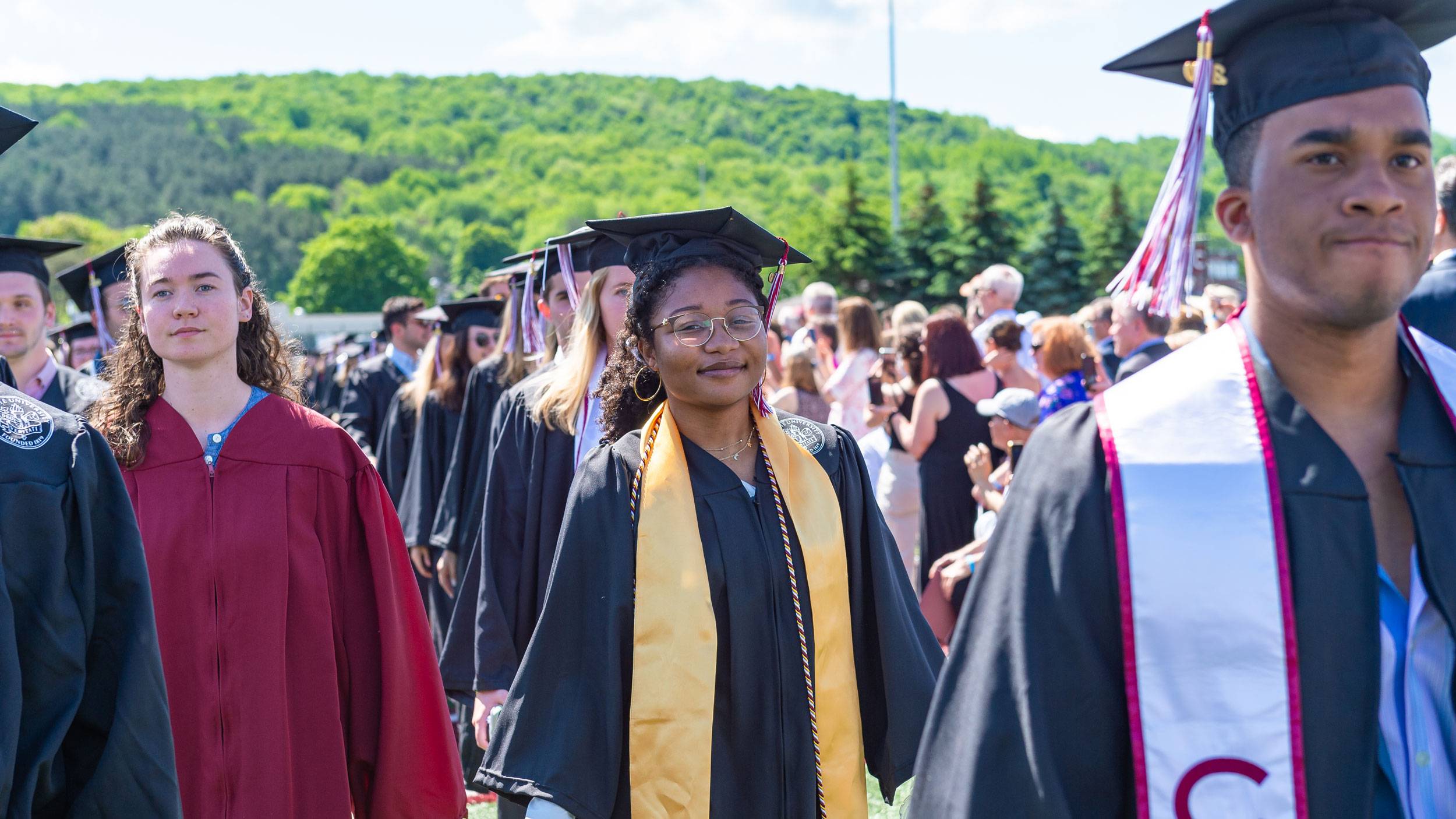 Today, at a celebration two years in the making, students sent home at the height of the pandemic received due credit for the grit and determination displayed during the final months of their senior year.

If not for the date on the program — and the 24 hard months of waiting — the Class of 2020 Celebration might have been the sunny, breezy day that students and families originally anticipated, pre-pandemic.

The weekend included traditions that the class missed due to COVID-19: ALANA graduation, LGBTQ+ Lavender Graduation, Torchlight Procession, President’s Reception, and a reception hosted by departments and programs.

The venue for the celebration ceremony itself changed to meet the demands of the era: the class gathered on spacious Crown Field at Andy Kerr Stadium. But they were piped in by the Mohawk Valley Frasers, and their families took seats behind them, as well as in the stands. Flowers were distributed, smiles exchanged. Tears of pride were managed based on personal inclination. The program included addresses from key figures in the Class of 2020 experience.

Associate University Chaplain and Protestant Campus Minister Corey MacPherson, in his benediction, acknowledged those who were lost since the beginning of the pandemic — family members and friends who might otherwise have been present in the audience. And he prayed that the class would remember the moments that made their experience worth cherishing, as the class itself will be cherished by the University.

Class President Hunter McLean reinforced the hope, noting, “It’s easy to get stuck on the idea that we missed out on so much due to the abrupt exit, but we did have 984 days in Hamilton. What Colgate gave us during our 984 days has had a lasting impact on all of us. It helped shape who we are and gave us a foundation to go out into the world and to make an impact in the last two years.”

Christian Johns, 1819 Award winner and SGA co-president, looked back on the lessons in stewardship that he received at Colgate from Taylor Bailey ’18 and his own subsequent efforts to teach the next generation to care for the University community.

“[Stewardship] requires people who are so dedicated to the cause, to the community, to the success and the progress of other people, that they are willing to sacrifice their own ambition.” Johns said. “We will be asked to make decisions for institutions that we have been called to lead. I hope that, as we begin to make those decisions, we will learn from previous mistakes and be intentional about understanding the past, observing the present, and envisioning the future. We must do so as good stewards.”

As grad students, engineers, analysts, teachers, paralegals, and much more, Class of 2020 members have already taken up the challenge. Kate Bundy, SGA co-president, noted the changes of the past two years. “We moved on — the world kept turning, and we kept growing, as individuals and as Colgate alumni,” she said. “As much as I long for what could have been, I’m grateful to be reunited with all of you as different people than we were two years ago.”

When the class graduated in May 2020, President Brian W. Casey officiated from an empty Memorial Chapel, with seniors watching online. At today’s ceremony, Casey gave a behind-the-scenes account of that Zoom session. The sound check went smoothly, and it was only when he answered the cue to walk on stage, taking his place in front of the camera, that he realized how alone he felt and how very quiet it was.

“This wasn’t how this was supposed to be,” he said. “All I could think was, ‘Where is my class?’ Because you were always my class.”

The silence and the pain prompted Casey to make a series of promises to these particular undergraduates, who arrived on campus with him in August 2016.

“This ceremony, technically a goodbye, is wrapped up in your first reunion — a hello,” Casey said. “For a weekend, saying hello and saying goodbye are together. So you will always have this complex story of leaving and coming back to this place — a place that was truly your home for years. And it will be up to you to understand the story, to tell it to yourself, to change it when it needs changing. To make it yours.”

Casey told his own story of the origins of his relationship with the Class of 2020. He reminded them that, during convocation in 2016, he told them that their class was tapped by history. Time proved him right. The bond that was forged between Casey and his class — strengthened as first-years together, as successful navigators of a life-altering pandemic, and as devotees of Colgate itself — sparked the president’s final rule:

“I will always tell you how wonderful you were. The class about which I was always so obnoxiously proud.”