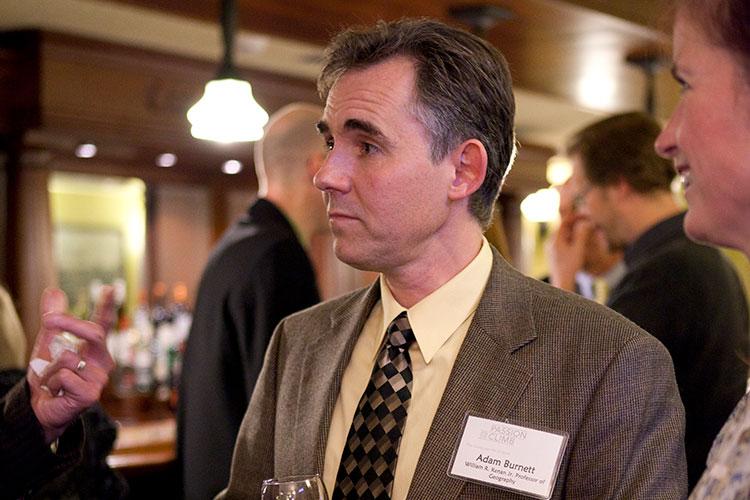 Geography professor Adam Burnett was named this year’s recipient of the Jerome Balmuth Award for Teaching and Student Engagement, and several other faculty members recently had appointments approved by the Board of Trustees.

The Balmuth Award was created through a generous gift from Mark Siegel ’73 to recognize distinctively successful and transformative teaching, regardless of methodology. Last year, the inaugural award was presented to Marilyn Thie, professor of philosophy, religion, and women’s studies.

His many articles have appeared in publications such as the Encyclopedia of World Climatology, Geophysical Research Letters, Antarctic Peninsula Climate Variability, Journal of Climate, Climate Dynamics, Journal of Paleolimnology, Geology, Physical Geography, and Northeastern Geology and Environmental Science.

Nolen is an organic chemist who specializes in the synthesis of organic compounds, most recently molecules that mimic glycoproteins found on the exterior walls of cell membranes. These molecules are involved in viral infection, immune responses, and cancer. He has received numerous grants from the Petroleum Research Fund, the National Science Foundation, and other agencies.

A faculty member since 1986, Nolen teaches a wide range of courses, from introductory chemistry and advanced organic chemistry to a first-year seminar course called Juggling Science and Judeo-Christian Thought (he is an accomplished juggler).

English professor Phillip Richards, who has been teaching at Colgate since 1987, was appointed Arnold A. Sio Chair in Diversity and Community in the Department of English.

His most recent book is Black Heart: The Moral Life of Recent African-American Letters, and his memoir, An Integrated Boyhood, will be published soon.