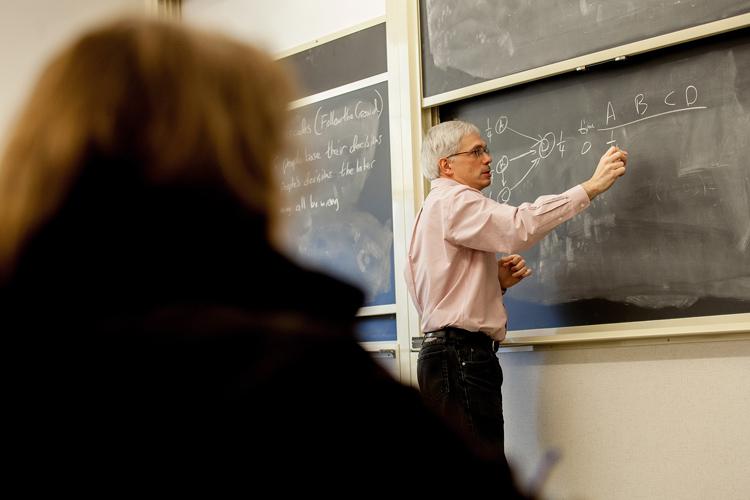 Colgate University is proud to announce that its applied mathematics minor has graduated to become the university’s 55th major.

The consistent popularity of the minor and continued interest from students led to the creation of the full major this year, according to Daniel Schult, Charles G. Hetherington Professor of mathematics.

As the name implies, applied mathematics is the use of mathematical theory and formulas to address real-world physical or computational problems.

“It doesn’t describe what kind of math we’re using as much as it describes the philosophy of how we’re using it,” said Schult. “In a regular mathematical setting, we’re working to prove whether something is true or not. With applied math, we’re saying that something has been proven — now what can we do with that?”

Schult also noted that there has been a recent trend of students creating their own applied-mathematics–themed majors through the natural sciences. That fact, combined with feedback from senior exit interviews, resulted in the development of the new major.

The new major requires a senior capstone experience, which is a project-based class, similar to a thesis development, that relates back to the student’s focused area of application.

“We also decided there should be more computer interaction,” Schult said. “Most mathematicians are using computers in some way to do their mathematics now, so we’ve added a class at the sophomore level to introduce students to the mathematical computations that would normally be behind a website or in the guts of a software package. We’re trying to get to the nitty gritty software development level of programming. That will also allow us to use the computer in new ways in some of the higher level classes.”

Jake Bensky ’19, of St. Louis, Mo., was leaning toward majoring in traditional mathematics, but he ultimately chose the applied mathematics major because of his interest in statistics, data science, and the idea of putting complex computation to work.

“I am extremely interested in how data and statistics can be used to solve problems and find insights,” Bensky said. “I feel like an applied math major, along with my computer science minor, can give me the background needed to excel in data science, or any other role that uses data extensively.”