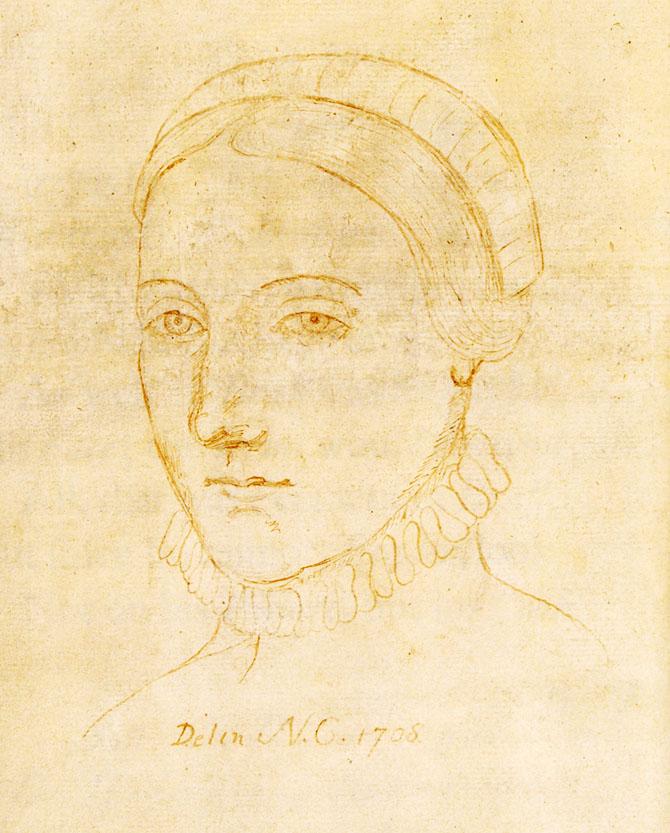 A scan of an artist’s sketch of Anne Hathaway from Colgate’s Shakespeare folio collection.

April 23 marks the anniversary of William Shakespeare’s birth and death — and, yes, he died on his birthday. In 2016, to celebrate his 400th birthday, Colgate’s Special Collections and University Archives brought out rare items from the Shakespeare collection, including a first and third folio.

The term “folio” denotes a particular printing size in which a single sheet of paper is folded once to form a four-page book. Shakespeare’s plays were published in folio form between 1623 and 1685, and Colgate’s Special Collections contains the first four original Shakespeare folios.

“The First Folio gave us texts of a number of plays we would not otherwise have at all,” said William Henry Crawshaw Professor of Literature Margaret Maurer.

Of the 36 plays in the folio, those not previously published include As You Like It, Julius Caesar, Twelfth Night, Measure for Measure, Macbeth, Antony and Cleopatra, The Winter’s Tale, and The Tempest. Many of these plays are read and discussed in Shakespeare courses taught by Maurer and Edgar W.B. Fairchild Professor of Literature Susan Cerasano.

Colgate also owns a Third Folio, which is especially rare since it contains the only surviving portrait of Shakespeare’s wife, Anne Hathaway.

“Our copy of the [Third Folio] is unusual in having a drawing in it that is described in the accompanying poem (also added in handwriting) as being the ‘figure’ of ‘Shakespeare’s consort,’’ said Maurer. “Because of this, Colgate’s copy is sometimes called the Anne Hathaway Third Folio.”

The portrait of Anne Hathaway was drawn on the verso of the title page of the folio, which was printed in 1663, several decades after Shakespeare’s death.