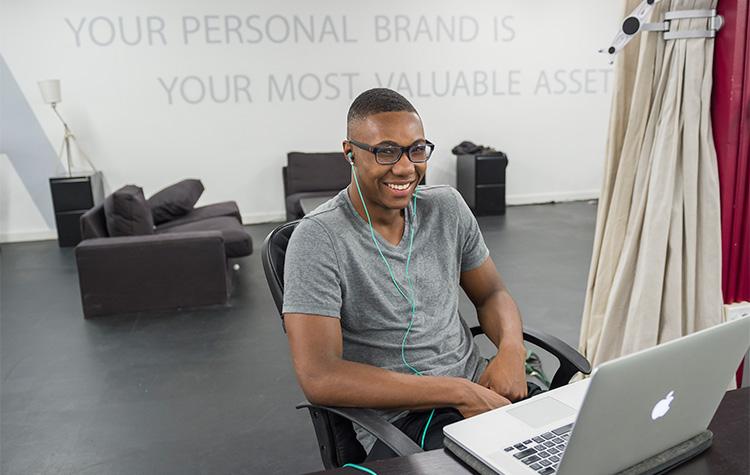 Ryan Diew ’17 will be appearing on ABC’s Shark Tank, October 1.

A fledgling idea, born during an airport layover and cultivated with the help of Colgate’s Thought Into Action Entrepreneurship Incubator, has landed a recent alumnus on the two-hour season premiere of ABC’s Shark Tank, Sunday, October 1, at 8 p.m.

While a press embargo restricts what exactly happened when Ryan Diew ’17 plunged into the tank to ask for funding from America’s most beloved — and sometimes reviled — venture capitalists, he promises the appearance is one to remember.

“I think they liked the idea, they liked my hustle, and they liked my grit,” said Diew, who graduated with a degree in computer science and played Division I basketball while at Colgate. Diew said he expects to appear during the show’s second hour. Diew came up with his business, a phone app called Trippie, when he was a sophomore traveling from Colgate to his home in Oakland, Calif. During a long layover, he wanted to grab some food, but he also didn’t want to lug all of his carry-on baggage through the airport. So, he let a stranger watch his bags. He also didn’t want his quest for food to result in a missed flight.

He thought there had to be a better way. So, he invented one.

“Trippie is essentially an airport mapping service that allows travelers to explore a detailed interactive map of the airport to immediately get the lay of the land,” Diew explained. “It displays menus, reviews, hours, and even calculates how long it takes to get to your favorite food spot or restaurant so you don’t miss your flight.”

Trippie wasn’t always about helping travelers quickly locate food or stores in airports. When he first brought his idea to the TIA incubator, Diew was hoping to develop an airport food delivery app.

“If I really wanted this idea to be a thing, TIA was the place to go,” said Diew, but the experienced alumni entrepreneurs in the group quickly poked holes in his plan. “They pushed back immediately. When you’re in college and you have no experience, how are you going to hire the employees in the airport? How are you going to do this, do that? There’s was so much red tape, but I didn’t want to give up.”

Diew taught himself how to code Swift, one of the most popular app development languages,  and he has worked to refine the product ever since. He also worked with former Colgate student Samantha Braver, and the two pitched Trippie at the 2016 Entrepreneur Weekend, where they took way more than $22,000 in funding. Braver later left Trippie for a job at Apple.

In 2017, Trippie was selected as an Entrepreneurs Fund recipient, which gave Diew $15,000 toward his venture and workspace in the downtown Hamilton incubator to work full time on his product. He was contacted for the Shark Tank opportunity after his business appeared in an Inc.com Coolest College Startup competition.

“Above all else, Ryan is insanely passionate about Trippie, and all of his mentors have seen this and admire this about him. In his view, the world will cease to exist without the app, and that’s exactly the mentality that every entrepreneur needs to have,” said TIA Alumni Executive Director Wills Hapworth ’07. “As we say in TIA, passion is the fuel for action, and that’s exactly what has kept Ryan coming back to the challenge of Trippie, despite setbacks and pivots. We are very confident he will figure out how to thread the needle and make Trippie a huge success that helps millions of people!”