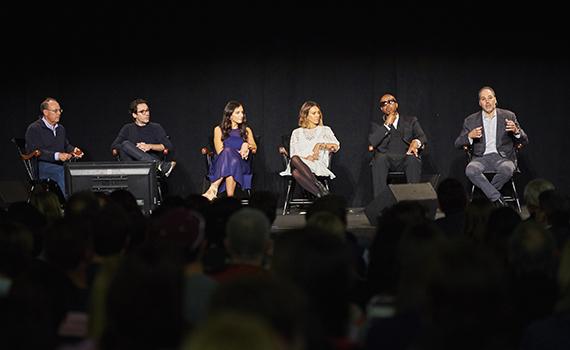 In conversation before a packed Cotterell Court audience, the entrepreneurs talked about the passions that drove them to succeed and some of the surprises they encountered along the way. They also offered wise words, gained through hard experience, for Colgate students interested in going their own way after graduation.

Following the interview, Shark Tank’s own Mark Cuban appeared via video to introduce a competition between four members of Colgate’s Thought Into Action (TIA) student incubator program. As on the popular television show, founders had mere minutes to pitch their ventures in hopes of earning investment dollars, with the five panelists each distributing $5,000 from TIA to the startups they liked best.

One by one, students took to the stage, introducing their businesses before taking questions from the panel. The experts asked for specifics on marketing strategies, potential rivals, revenue projections, current fiscal needs, and more.

“The summaries were excellent, the presentations clear,” commented Coleman, a veteran of countless pitches. “You guys were well trained.”

When the lights came up, Indify, presented by Keshav Garg ’15, was the top choice. His company secured $10,000 to continue developing an algorithm that allows recording companies to identify hot new artists based on popular measures from across the Internet. Other TIA entrepreneurs included Daniel Mosko ’17, Jake Danehy ’16, Caroline Danehy ’19, and Tyler Sherper ’17.

Addressing every one of Colgate’s Shark Tank participants, Rosensweig summed up on behalf of the panel. “I would encourage you to think big,” he told them. “What you’ve heard from the people here is that they thought, ‘no obstacles,’ and they thought huge. That’s my advice to you.”